I spent my teenage years being terrified of getting pregnant.

I spent my teenage years being terrified of getting pregnant. Every Bible lesson, biology lesson, and casual reference to the future was marked with the warning: if you get pregnant, your life is over. Though I knew I wanted a family someday, I took heed, and I avoided sex for as long as I could, and when I did engage in sex with men, I was very careful never to do so without protection.

When I began dating women, it was definitely a relief not to worry about it anymore. I skipped careless through my 20 and landed, childless, into my thirties. I pursued my passions, I wrote, I chased women, I traveled, I slept late, or woke up early—my day was always my own. I imagined that one day I would meet Miss Right, spend an appropriate number of years reveling in our romance, then, over careful discussion and even more careful planning, we would find a sperm donor, who was the right combination of both our ethnicities, and we would procreate.

Except, one day I looked up from the jaded wreckage of my umpteenth breakup and was deafened by the horror of my ticking biological clock. I was 35 and living a solitary life in a one-bedroom apartment in New York City. Suddenly, writing a memoir, traveling to South Africa for the summer, being on Broadway or drinking red wine from the navel of one gorgeous, feminist lesbian after another didn’t seem all that meaningful anymore. I wanted to experience another kind of love. I was ready for a baby.

My friends who had babies talked about how amazing it was to be a mother, how it changed them, how it was simultaneously the most terrifying and the most rewarding relationship they had ever had. Having never had a relationship with my mother, I had no first-hand knowledge of what they were talking about. I only knew that I wanted to experience it. Against every instinct and every bit of advice I was given by the wise old women in my past, I decided that I was going to get pregnant without having a partner.

I scanned my circle of friends for sperm donors. I wanted somebody good looking and smart and OK with signing away his parental rights. I was surprised by how many men had a problem with the latter. It took me a year to find someone who would say yes. A young artist, Edward, agreed to donate his sperm; he did not want the daily responsibilities of raising a child, and I wanted the freedom to do the day-to-day without the unpredictable compromises of co-parenting. He thought it was a wonderful thing to help a lesbian become a mom. I thought he was a miracle for saying yes.

I felt sure that I was prepared for Edward’s visit in every way. I had been charting my cycle for months now. I peed on a stick every morning between the hours of 6 and 9. I took my basal body temperature first thing in the morning. I examined my vaginal fluid. I knew how long he should abstain from ejaculation in order for me to get the brightest and the best sperm to partner with my desperately aging egg. It was all very normal, I told him. I calmly explained how long and why he had to get there before the egg died.

The obsessive-compulsive that I am, I cleaned the bathroom and dimmed the lights; I set up the pillows on which to prop my hips after I did the insemination; I had my needle-less syringe ready. I laid everything out on a clean, pink bath towel in the bathroom and waited for him to arrive. And when he did, I soundlessly pointed him to the bathroom and turned up the music so that he would have some privacy in my one-bedroom Brooklyn apartment. I lay down on the couch and visualized my baby’s face—because I had heard somewhere that that improved a woman’s chances of conceiving.

So I was caught completely off guard when a minute later, the door popped open, and Edward padded out with the pink towel wrapped around his lower half.

I almost said, “Your hand, you have to put your penis in your hand and rub,” but my mouth wouldn’t work. I opened it, but nothing came out.

“The stuff,” he said. “Where should I put the stuff after it comes out?”

I rummaged through my kitchen cabinets in search of a container. A coffee mug seemed daunting; the shot glasses too small. But the flower-printed soy sauce dipping dish would be exactly the right size to make any contribution look hefty. It was wide enough to not require perfect aim. I grabbed two and presented them with fanfare to him. He tightened his towel and headed back to the bathroom.

Five minutes later he rushed out, dipping dish in hand, almost brimming over with all my possible children. I grabbed the dish and sped off to the bedroom.

It took me only a few seconds to suck up every bit of the semen into the syringe. On my back and knees to chest, I inserted the needle-less syringe and emptied it inside myself, after which I forgot to picture my baby’s face, because it was kind of hard trying to relax, and to elevate my pelvis, while keeping my vagina covered without moving so that I could hug Edward goodbye. He had a date, so he had to rush off, but he wished me all the luck in the world.

Two weeks of obsessing and checking my body for pregnancy symptoms later, I peed on a stick, and it told me that I was not pregnant. I was devastated.

It took me another year to find the courage to do it again.

When the second attempt proved unsuccessful, I decided to go to the experts.

The staff at the clinic reception was sweet and helpful. They all smiled and listened and nodded while I explained that I was a lesbian and wanted to get pregnant. They laughed when I told them about my funny, unsuccessful home attempts. They assured me that I had come to the right place.

“Look here, Staceyann,” said Dr. B, as he turned the screen toward me during the ultrasound. “Do you see that mass right there? That is a fibroid that is very unfortunately located.”

I looked at him blankly, before asking what he meant.

“Listen.” He said, “Don’t start thinking negatively. The trick is to think positive. I suggest we do a couple things first. I am of the opinion that the size of this mass should be removed before we proceed. I’m going to send you to a doctor who has operated on a member of my own family to do this surgery.”

Six months after laparoscopic surgery, I began taking drugs, which turned me into a crazy woman. First up were the birth control pills, after which they added the series of fertility drugs. Those kicked it up a notch. My breasts were swollen. I was constipated. I slept all the time. I was peeing twice in the hour. I was convinced I was pregnant, though nothing had been done to make that possible just yet. My ovaries were looked at, my blood tested for genetic abnormalities.

Then they asked for sperm.

In the years I had been plotting to become a mother, I had had conversations with maybe 30 men about sperm. Many had said yes and then changed their minds. So now, I made one last-ditch effort and reached out to a handsome 20-year-old filmmaker. He said yes, and we took his super-sperm to the clinic.

They put me under, took ten eggs out of my ovaries and attempted to fertilize them. Three days later they called me to say three of my eggs had made it to embryos. I went back in and watched on the high-tech screen as they injected the three four-celled globs into my uterus.

Everyone who has done this will tell you that the two-week wait for the blood test is the hardest part of trying to get pregnant. It is brutal. Every sign is an indication that you are pregnant or not pregnant. Every moment is agony. Every episode is reason to collapse into tears. And the compulsion to test is almost physically painful to resist. I lasted a week and four days. On Mother’s Day I dared the universe and tested. The first line appeared in seconds. The second took its time, but it was faint, and I was almost convinced that it wasn’t there. I took a picture with my cell phone and sent it to a friend, who called me back whooping and screaming and saying congratulations. I could barely breathe. I didn’t want to let myself believe that this journey had actually borne fruit.

I cried because I was so happy. And then I wept because I was so alone. I cried for myself as a fetus, unwanted and unplanned for. I allowed myself to ache for the child I had been, who was forced to navigate the world without parents, without a buffer between her and the world. I promised the tiny seed growing inside my womb to never allow him or her to feel unwanted or unloved. I marveled at how changed I felt. Already.

Staceyann Chin is the author of the memoir ‘The Other Side of Paradise.’ This piece first appeared at The Huffington Post. 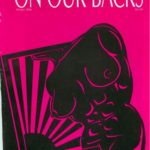