Velvetpark Media is a 501(c)3, registered in the state of New York. Our Mission is to serve as a platform for artists, writers, and activists in the LGBTQI community through multi-platform publishing and an artist residency program (launching fall 2020).

Velvetpark Media is dedicated to fostering and educating queer women’s subcultures in the arts, academia, and activism. Our community is proudly intergenerational, feminist, and queer—for the culturally, sexually, and politically marginalized person who identifies with the “marginal,” the “liminal,” the “nontraditional,” and the “other.”

Our mission is to serve as a safe space for expression, exploration, and intellectual debate about issues pertaining to these three spheres of our collective subculture—the subculture of the “queer woman,” however she comes to identify as a queer woman.  We are invested in promoting and disseminating the artistic, literary, intellectual, and spiritual work of marginalized queer women and people.

2002: Velvetpark Magazine was founded New York City by Grace Moon. It began as a 48 page glossy print magazine published tri-yearly. Our first print issue was released in July 2002 with a print run of 5,000 magazines. Second issue released in December.

2004: Velvetpark applied for the trademark “Velvetpark, Dyke Culture in Bloom“. The United States Patent and Trademark Office rejected the mark on the grounds that the word “dyke” is “immoral and scandalous”.
– issues no. 3, 4, 5 released this year.

2005: The Vista IP Law Group in Irvine, CA amended the application in an effort to have the USPTO recognize the word “dyke” as an accepted and welcomed signifier by the lesbian community. “
– issues no. 6,7,8 released

2006: “Velvetpark, Dyke Culture in Bloom” trademark accepted in April 2006.
Vp is distributed throughout the United States, Canada, Europe, Australia, and in parts of Asia.
– issues no 9,10,11 released 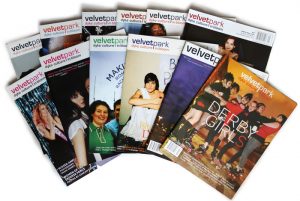 2009: Vp relaunches as a digital platform with online community.

2013: Velvetpark Media inc. registers as a not for profit.

Behind the Scenes, side musicians speak up