Anyone keeping up with The Good Wife? Well, it finally got gay (or gay-er).

Anyone keeping up with The Good Wife? Well, it finally got gay (or gay-er). Kalinda, Archie Punjabi’s cute kinda-closeted-maybe-bisexual character finally smooches with none other than the great Lilli Taylor.

Since I know most of you have no idea what is on network TV and when, you can catch The Good Wife on their site. The sixth episode of the second Season aired on Tuesday. But we only caught up to the bi-now-gay-later kiss this weekend on the web. If you haven’t you should, its worth watching.

The only lame part about this gay-lite storyline is it seems Kalinda’s new nemesis Blake, is trying to blackmail her for being bi? FTW? No matter, the show teems with sultry sexiness. 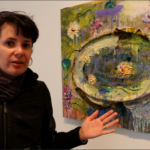