Alright, Boob Tubers, let’s talk Golden Globes. Our first order of business? WTF is up with the categories this year? Nurse Jackie is up for “Best TV Series, Comedy”? Really? Don’t get me wrong; the show is hilarious. (And the fact that Merrit Wever, who plays Zoey wasn’t up for a “Best Supporting Actress, Comedy” Emmy this year was a crime against God and man.) But c’mon, this show as a whole is obvs not a comedy, to the point that seeing it competing with traditional sitcoms in this category is somewhat crazy-making.

I know, Jackie. I don’t get it either.

TV as we know it has evolved, and it’s high time for the Hollywood Foreign Press (and the Emmy’s, too, dangit) to recognize this by revamping their categories for TV awards.

The Golden Globe drama categories are wonky this year, too. Have you seen the nominees for “Best Actress in a TV Series, Drama”? Julianna Margulies (The Good Wife), Elizabeth Moss (Mad Men), Katey Segal (Sons of Anarchy) and Kyra Sedgwick (The Closer) all make sense, yeah? Except that my one true love, the vastly underrated Piper Perabo is also up for this award for her role in silly spy caper Covert Affairs. Say WHAT?

I love Piper so much that I can’t help but be delighted for her, but one of my biggest beefs with the spectacularly meh Covert Affairs is that this is a show that still can’t seem to decide what genre it wants to be. It’s not funny enough to be a comedy, and not dramatic enough to be a drama, so it’s kind of just an action show with bad writing, murky stakes, and a great lead. I dunno, maybe my problem is seeing CA up for ANY award, but I can’t help but send out a great big mental WTF to the universe to see it listed with so many great dramas, when it’s not really a drama at all.

Even the luminous and oh-so-watchable Piper Perabo

There has to be a neater solution to the nomination process for these awards, like changing the categories to reflect individual performances as outstanding for either drama or comedy, instead of arbitrarily labeling entire series as “dramas” or “comedies,” when so many of the best shows on the air these days effectively function in multiple genres. Or, yanno, just don’t nominate shows with season finales so depressing they make Mad Men look like a wacky, fun little romp as a BEST FRICKING COMEDY.

But it’s not all doom and gloom and WTeffingEff from me on this happy occasion of the Golden Globe nominations announcement. Things the Hollywood Foreign Press are doing right so far this awards season?

Best Performance by an Actress In A Television Series – Drama

Best Performance by an Actor In A Television Series – Drama

Best Mini-Series Or Motion Picture Made for Television

The Pacific (HBO)
Playtone and DreamWorks in association with HBO Films

Best Performance by an Actress in a Supporting Role in a Series, Mini-Series or Motion Picture Made for Television

Best Performance by an Actor in a Supporting Role in a Series, Mini-Series or Motion Picture Made for Television 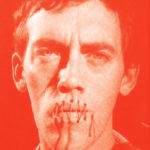 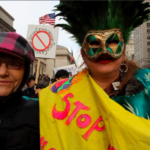 Protest at The Smithsonian, Marching with Barbara Hammer