Home » Book Nerd Chatter: The Other Side of Paradise

A good memoir is a satisfying read in a way that few other literary works can aspire to.

A good memoir is a satisfying read in a way that few other literary works can aspire to. The sheer intimacy of strolling around in somebody else’s head for 200 or 300 pages, trying on their formative memories for size – it’s heady stuff. But I think that for those of us in the queer community, it’s especially meaningful to be able to read real life queer coming of age stories, the incredibly true adventures of our fellow wayfarers down this less-traveled road.

This week marks the release of The Other Side of Paradise, the memoir of poet, performer and political activist Staceyann Chin. Spanning the first 24 years of the author’s life, the book chronicles Chin’s troubled upbringing in Jamaica. Born to a father who refused to acknowledge her and a mother who abandoned her shortly after her birth, Chin was initially raised, along with her brother, by their hard-working, God-fearing, illiterate grandmother. Handed off to be cared for by increasingly antagonistic kinfolk in the absence of her parents, young Staceyann is left to fend virtually for herself in the face of poverty, neglect and abuse. But even from a young age, her intelligence and resilience mark her as a force to be reckoned with.

As the heroine of her own story, book worm, outcast and motherless daughter Chin is easy to identify with and impossible not to root for. Throughout her childhood and adolescence, she is often singled out and censured by those around her simply for having the temerity to speak her mind. Long before her sexuality ever comes into play, her very frankness and ability to verbally cut through crap and get to the heart of any matter at hand seem to have marked her as “other” or queer within the bounds of her culture. It is Chin’s refusal to allow herself to be victimized by the systematic oppression of sexism and homophobia inherent within that culture that makes her such an inspiring figure. Ironically, it is that same refusal to be silenced or victimized which ultimately forces her to exile herself from her homeland, where “corrective” rape and murder are all too often the consequences of visible queerness.

I’ve yet to have the pleasure to see Staceyann perform live, but I have read and enjoyed her blogs and poems online. As set down in The Other Side of Paradise, the roots of her writing, her art and her feminism make for compelling reading. By turns heartbreaking, heartwarming and righteous wrath-inducing, Chin’s story is, above all else, incredibly moving. It is a testament to the power of believing in yourself, of never giving up and of being a kick-ass chick with an impressive arsenal of words with enough of a ‘big mouth’ to wield them. 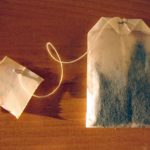 Songs to Teabag By