Catherine Opie is perhaps one of the most significant living photographers of our century.

Catherine Opie is perhaps one of the most significant living photographers of our century. Her mid-career retrospective at the Guggenheim Museum in New York closed last week after a four-month run.

Her work came to prominence in the mid 1990s when Opie began exhibiting photos of her friends in the queer leather culture, much the way Robert Mapplethorpe did some 20 years earlier.

Opie’s portraits of queer-identified women and men brought identity politics into the realm of fine art for the first time. Opie says, however, she is just continuing a dialogue of image making that goes back to the great German Renaissance painter Hans Holbein the Younger.

Catherine Opie’s works go far beyond portraiture to still life, domestic scenes, city and landscapes and sports in an exploration of Americana. Before the holidays, we had the opportunity to tour Catherine’s show with her, walking through four floors of the Guggenheim discussing her work.

Letter From The Editor: Goodbye, Hello 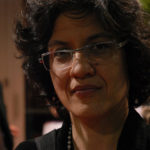