Last night was the opening of photographer Catherine Opie’s lastest show, “Girlfriends” at Gladstone Gallery in New York. The show is a return to the dyke. And it is arresting.

Last year Velvetpark visited with Opie during her mid-career retrospective at the Guggenheim. While Opie got her start in the art world with (then) groundbreaking queer portraiture, her early passion has always been photographic explorations of environmental spaces; landscapes, cityscapes and even the burbs. Her later work has consisted of long panoramic subtle, misty vistas of oceans and icehouses.

But last night, “Girlfriends”, was dyke central. (I’m embarrassed to say that as all up-on-it as I think I am, a friend from upstate who had come down to go gallery hopping actually had to clue me in that Opie was opening.) The cacophonic who’s who cramming the gallery consisted of art aficionados, artists, lesbian icons, art critics, lots of well dressed queers, and girls on dates.

The legendary art historian Linda Nochlin, who is credited with placing women in the canon of Art History, strode past me, disappearing into a mass of tattooed bespectacled queers before I was able to summon the courage to talk to her. Painter Debora Kass and her partner the conceptual artist Patrica Cronin (who had actually sat for Opie back in the day) were on hand, along with Hot Head Paisan creator Diane DiMassa (also an Opie subject), who snagged some discarded foam-core outside the gallery on her way home for a future painting.

I fortuitously met the Pulitzer Prize winning art critic Jerry Saltz. I began reading Jerry’s columns in the Village Voice (back when the Voice had one) as a grad student years ago. Since then he’s moved to New York Magazine, where he breaks down high and often obtuse art into the vernacular, seamlessly weaving in cultural and social criticism with, dare I say, a whole lotta heart. Would I be crossing a line if I called him the Keith Olbermann of art criticism? He always struck me as an open minded, curious, feminist. (Saltz, by the way, is married to the respected New York Times art critic Roberta Smith.)

Saltz was intently staring at the portrait of Jenny Shimizu when I approached him. After exchanging our introductions he asked, “Do you know her?” pointing at Shimizu. “Yeah, she’s a dyke icon… she was a high-fashion model.” I answered. Not seeing any recognition in his eyes, “She banged Madonna and Angelina Jollie!” I exclaimed. I forget that Lesbianism is a ghetto, and that we don’t often show up as even a blip on straight-dar.

“Can you point her out to me?” Saltz asked. It so happened Shimizu was in attendance with her lady friend. And when I did, I could see Saltz reconciling the “come hither if you dare” image from the photo with the svelte low-key butch standing a few feet away.

Although Saltz said he has followed Opie’s work since the beginning of her career, he appeared to me to be surveying the crowd with a new tuned-in gay-dar. We chatted a bit more about dyke culture, with the parting words of agreeing to be in touch.

Reporting from The Armory 2010 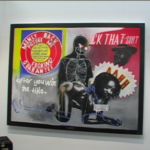