If you waited until the last minute to see the Chris Ofili retrospective “Night and Day” at the New Museum,

this is your official notice that the clock is clicking down until Sunday, the show’s close. This is the first major exhibition of Ofili’s work in the US, since 1999 when he was introduced to the New York art world in the infamous “Sensation” exhibition at the Brooklyn Museum. Way back when, under the conservative shadow of the Guliani administration the Brooklyn Museum came under attack for hosting the works of the YBA, young British artists who had heralded in an brash new era of Post-(Post?)-Modernism.

Ofili’s painting, “Madonna” made with elephant dung sparked the particular ire of then Catholic mayor of New York, Rudolf Guilani whose failed attempt at shuttering the museum only brought more crowds to the show. Ofili’s subject matter has always and still does revolve around history, pop-culture, mythology, and personal identity.

Almost 20 years later, the young Brits (not so young anymore) have moved into various stages of their mature careers, some gracefully and others bombastically. Ofili is one of the former. If the “Madonna” is the only work that comes to mind when you think of him, then you really must get to this show. I’d say that it is the tip of the iceberg, but there are other really unexpected aspects to his work that one iceberg doesn’t even conceal.

Ofili’s early elephant manure paintings (early 90’s – early aughts), display his virtuosity in spatial representation; layering of transparency over solid objects, as well as the speckled tiny obsessive dimples of paint. Ofili captures a Pollack-like depth in his work by abstracting space using decorative motifs and subject matter. The elephant dung is really just a catch phrase for this work, it neither feels formally important nor does is seem particularly titillating. While the dung held personal meaning for Ofili, both aesthetically and culturally, after his exhibition at the Venice Biennale, in which he used the colors of the Pan-African liberation flag, he leaves this style altogether never returning to it.

I’m skipping ahead to his latest works found on the forth floor, so I can return to and leave you on the third floor. His latest paintings are reminiscent of Matisse, the palette and formal character of the figures seem a little too French Modern and predictable. Perhaps this is a respite for the artist, a period to work out formal, aesthetic or personal or philosophical ideas before moving on or evolving into something else? In looking at an artists progression in total, one hopes to see changes and advances like these; in style over time, even if those periods don’t always add up to the best work.

I write “respite” above because I imagine the artist needed to take a break from the large paintings on the third floor, a series called “The Blue Rider.” After Ofili’s star showing at the 2003 Biennale he moved from London to Trinidad and his works also dramatically changed in appearance its impossible to say it was just a matter of scenery. “The Blue Rider” series of works are powerful and full of the kind of gravitas that reminds one of Goya’s black paintings.

In the alcove on the third floor hang a few noodliy drawings in pencil, where tiny little afros are arranged in columns and masses (not obvious on first glance). They reveal a more playful side to the artist who you sense thinks deeply and seriously about his work.

It is a deceiving interlude to the works in main gallery. “The Blue Rider” series comprise five large scale (approx 8′ x 6′ or larger) paintings in what appears to be ultramarine blue, alizarin crimson, some-kind of purple and probably burnt or raw umber, scintillate under dimly lit warm light. The figures are shadowy and evocative, one senses the opression of colonialism and postcolonial struggles. But it is impossible to make out the details to be sure of any precise reading of these paintings.

The effect of the paintings under this presentation is so sublime and mysterious its clear the artist had thought through the effects of not only hue, but transparent gloss, matte opacity and reflected light as it plays across the surface of the canvas. This kind of painting is impossible to understand in photo, there is no way to get the effects of the paint and the light in a reproduction. The images here do no justice, at all. They absolutely must be seen in person. 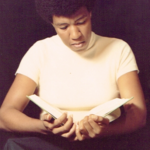 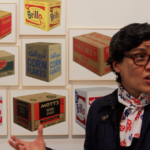