Outside NY’s Whitney Museum and San Francisco’s Museum of Art, Lynn Hershman Leeson asked men and women on the street the following question: “Can anyone name three women artists?” It’s

Outside NY’s Whitney Museum and San Francisco’s Museum of Art, Lynn Hershman Leeson asked men and women on the street the following question: “Can anyone name three women artists?” It’s difficult to gauge who is more disappointed: the filmmaker asking the question or each of the individuals, stumped. Two people could only remember Frida Kahlo. This is how Lynn Hershman Leeson begins her personal survey of feminist artists: !Women Art Revolution, which opens at the IFC Center in  New York on June 1 with an introduction by Kathleen Hanna. During its week in New York, the film will be introduced by guest speakers at select screenings.

This documentary film was written, directed, produced and edited by a female artist who financed her portion of producing costs by selling her art. The sale of her work includes a piece purchased by a collector in the 1970s, only to be returned once he found out the artist was female. The collector believed that buying female art was a bad investment. Hershman Leeson’s work was turned down by a major museum and galleries, but eventually sold at 9,000 times its 1975 value. It was the sale of these early works that guaranteed the completion of this film. It seems to be the only historical document of its kind, featuring artworks by lesser known artists alongside in-depth interviews with better known artists, curators and historians, completed from 1966 to 2009.

!Women Art Revolution spans forty years of dialogue with influential activist female artists who remain under-represented and inconsistently shown. Although successful female artists have existed in and out of records since Pliny, and at the very least since Vasari’s second edition of Vita published in 1568—a basic and reliable chronology is fractured. For example, in 1906, the Hôtel du Lycéeum France held an exhibition titled Une Exposition Rétrospective d’Art Féminin. None of the paintings in that show can be located today, and the feminist awareness propelling this show cannot be studied either.

A basic Google search produces more visual results for an obscure Italian painter who chose to live in seclusion until her death in 1753—Giulia Lama—than for an exhibition publicly held 104 years ago. How else to emphasize the need for a perceptual cleansing of public records? This film magnifies the importance of questioning what remains edited OUT of chronology.

“There was a sort of built-in attitude within the institutions that it was acceptable, normal and preferable to have all white male shows. So, coming up against that both as a black person and as a woman was very daunting because it had to do with basic attitudes.”—Howardena Pindell

In Hershman Leeson’s words: “In 1966, I borrowed a camera, figured out how to use it and shot people coming through my living room in Berkeley. Then I forgot about all that footage and it was stored in boxes in my studio until I found it in 2004. I felt it had become even more relevant and it was a personal imperative that I complete the project! I felt a tremendous responsibility to find the story inside that raw footage and to honor the women who struggled to invent themselves and who introduced the concepts of social protest, collaboration and public art that addressed directly the political imperatives of social justice and civil rights.”

“What really spurred me to do performances was around 1970 when the killings at Kent State happened and Nixon invaded Cambodia. I got a sense of the immediacy of these issues in my life that made me feel as though the work I had done up to that point was just not adequate to express my current concerns. And so I felt the need to move out into the world and be more concrete and more confrontational in my interactions with people through my work.”—Adrian Piper

It’s interesting to hear Janine Antoni exclaim “I’m making the work of the seventies!” in the same film with Nancy Spero explaining how alone she felt, making activist works, before she found other feminists. A silent history indeed. It made me think of the need to centralize resources, and above all, to engage with a legacy long edited out of the process of how art is produced, shown and consumed. Not just by markets, but by people eager to intellectually consume and expand the parameters of progress.

The most surreal part of the film is footage of Congressmen objecting and complaining about Judy Chicago’s Dinner Party, “a work that has 39 elaborate place settings depicting female vaginas.” If you ever feel like flexing your intellectual table manners, The Diner Party is on permanent display at the Brooklyn Museum. Staged as a ceremonial banquet, each plate setting commemorates an important woman from Western History, and another 999 names are written beneath the triangular table.

Chicago’s installation was described by congressmen as pornography, without nudity even being involved. Unexpectedly, the single voice of protest against such conclusions, was male, Ron Dellums: “Art is a precious expression of the first Amendment of the Constitution.” Chicago states in the film: “All men discussed the future of The Dinner Party, not one woman spoke up. Men determined and decided that The Dinner Party was not going to enter history.”

Before men were debating the validity of female art in Congress, the art market in the sixties was dominated by Minimalists: Donald Judd, Robert Morris, Carl André, Dan Flavin, Sol LeWitt, Tony Smith. (Systematically absent is Anne Truitt’s sculpture, which predates Judd and Ellsworth Kelly.)  The sociopolitical art created by women in the sixties and 70s was at odds with the Minimalist movement. It was preferable to separate politics from Fine Art.

Something of a paradox there—isn’t the stereotype of superficial and frigid historically reserved for females? Anyone who believes that might want to compare the works of male Minimalists to the early works of female artists who worked or began as Minimalists like Anne Truitt (color!) and early Agnes Martin (warmth!).  I see it as progress that today a market exists for both apolitical and sociopolitical aesthetics, but does activism thrive with equity in both spheres?

“In editing that issue1, one of the things that came up right away was how little there was out there. It was very hard getting women to, in a way…in a sense almost come out as artists, not as lesbians, but come out as artists because the lesbian separatist community was anti-art, it [art] was bourgeois.”—Harmony Hammond

One archival clip is particularly striking: Nancy Buchanan and Barbara T Smith performing part two of Please Sing Along in which “…minimal art and feminist art wrestle for domination.” As an embodiment of the struggle between form (Minimalism) over content (Feminism), Please Sing Along presented me with a deeper analogy: an incarnation of those polemic perceptual values of women: the physical versus the intellectual. Because creative energy is mythically attributed to the feminine, this performance pits creativity against itself by ‘pitting women against each other.’  And in that pit is stasis.

The commitment to repopulate a chronology of the Arts with the legacy of significant contributors previously discounted and/or ignored—that seems the most productive way to transform what is considered ‘career suicide’ (feminist art) into Context.

!Women Art Revolution is on a limited showing at independent theaters worldwide, here in New York’s IFC Center until June 9. Check the online schedule for a screening near you and feel free to request this picture at your nearest and dearest indie picture house if venue is not on the schedule.

1 Hammond is referring to editing the following feminist publication:
Heresies: A Feminist Publication on Art and Politics. “Lesbian Art and Artists.” Issue No. 3. Fall 1977.

Do You Care That The Real L Word Is Back? 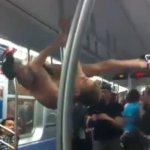