Several years ago in the hallway of my apartment building, I noticed a book, wrinkled by water damage sitting on a pile of trash “

Several years ago in the hallway of my apartment building, I noticed a book, wrinkled by water damage sitting on a pile of trash “Born in Tibet.” On the cover was a picture of monk and a prayer flag. Turned out this was the autobiography of the in/famous Tibetan monk Chogyam Trungpa. I was superficially aware of this man, who all I knew at the time was the guru (teacher) of the famous best-selling author, monk, Pema Chodron. Don’t we all have a copy of “When Things Fall Apart“? Its the getting-over-your-breakup book for lesbians.

I was also aware he had started the book publishing house Shambhala that prints terrific titles on Eastern and Western mysticism and spirituality. And also there were the rumors of his lifestyle that made him an incredibly controversial figure within Tibetan Buddhism. He had renounced his monastic vows once he came to the West. He drank, smoked, and had many love affairs throughout his life (some simultaneously). He died at the age of 48 from various health complications ranging from liver failure to diabetes.

Yet he was renowned as a great guru by many throughout his life and at his cremation auspicious signs that he died an authentic Lama appeared in the sky. His funeral was also attended by the high ranking monks of various Tibetan lineages.

It took me at least another year to finally flip through the book. I cracked it somewhere a quarter of the way through and fell upon Chogyam’s account of leaving Tibet in 1959. I was riveted. Under threat by the Chinese systematic destruction of monasteries and the persecution of monks (as Mao Zedong solidified Communism’s hold over Asia) 80,000 Tibetans fled the country. Refugees poured into India where the Tibetan Government (headed by the Dalai Lama) remains in exile. Tibetan monks then moved to all quarters of the globe, bringing esoteric Buddhism with them.

In his book, Trungpa recounts his journey out of Tibet, traveling through snow packed gorges and mountainous with no communication apparatus what so ever. No telephones, no news papers, not even radio coverage. Nor did Trungpa and his companions have maps or compasses. News of advancing Chinese solders came by word of mouth as lay people and monks made life or death decisions to escape their homeland. Needless to say the entire Himalayan mountain range separates Tibet from India.

Trungpa’s account takes place over many many months of travel, hiding out, consulting astrology, meditating, and doing oracles to find safe passage for a growing group of monastic and lay refugees who wanted to follow him. They made their way initally on horseback, then on foot and eventually ran out of food. They resorted to eating their leather bags near the end. Trungpa was only 19 years old at that time.

The book ends with a rather cursory account of his life upon entering the West, when the most important part of his life begins.

Here’s where the documentary, “Crazy Wisdom: the Life and Teaching of Chogyam Trungpa” picks up. The movie premiered in New York and Los Angeles last Friday. Almost 30 years in the making, “Crazy Wisdom” is a full length film made up of interviews from Trungpa’s closest students as well as archival footage from his life in England and the U.S.

The movie covers the basic details of Chogyam’s life and teachings in the West, including the founding of Shambhala (his mediation school) and the Naropa Institute, the first Buddhist University in the West.

More importantly the film address the paradoxical, sometimes conflicting, yet illuminating experience of having a living master (an experience aptly captured in the title). While addressing the controversial aspects of Trungpa’s romantic relationships, which he carried on while married, as well as his infamous drinking habits (gin was his alcohol of choice), the film manages to elucidate the wonder and profundity of such a being and how it is that someone so unexpected affected the lives of so many. Trungpa can be credited with translating the teachings of esoteric Buddhism for Western minds, and the continuation of Tibetan Buddhism outside of Tibet.

Interestingly the filmmaker, Johanna Demetrakas a student of Trungpa, was told by the lama many years earlier, she should make a film about the then fledgling Shambhala movement. Johanna, a penniless young director then, began shooting footage in the 70’s not knowing what would take shape some 40 years later.

At the end premiere in New York, a talk followed with the filmmaker and two of Trungpa’s leading students. Someone asked the panel to explain what “Crazy Wisdom” actually means. One of his long time students Agness Au said simply (I’m paraphrasing from memory): We have this notion of wisdom, and what it should look like. What Trungpa showed us was that wisdom reveals itself in unexpected ways.

“Crazy Wisdom” closes Saturday at the Rubin Museum and has been sold out since mid-week, but will be picked up by a distributor in the near future. If you miss this run, not to worry, crazy wisdom will appear when you least expect it. 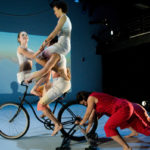 LAVA Puts Atlas on The Map