What could have ended a 21 year blacklisting of LGBTQ art in a major museum context has become the target for a fundamentalist attack on basic civil rights and freedom of expression.

What could have ended a 21 year blacklisting of LGBTQ art in a major museum context has become the target for a fundamentalist attack on basic civil rights and freedom of expression. On December 1st, 2010, G. Wayne Clough, the Smithsonian Secretary, ordered Wojnarowicz’s Fire In My Belly video to be removed from the Hide/Seek: Difference and Desire in American Portraiture show at the Smithsonian’s National Portrait Gallery. Curators of the show weren’t consulted, nor was the Director of the National Portrait Gallery, Martin Sullivan. How did this happen? Soon after Penny Starr’s review was published by the conservative cnsnews.com, Catholic League President Bill Donohue called the video work “hate speech” and criticized the usage of a crucified Jesus covered in ants as “anti-Christian”, among other things. Under pressure, after threats by Congressional Representative John Boehner and Eric Cantor, the Smithsonian’s Secretary removed the video from the exhibition. This act of censorship officially altered a show about LGBTQ visibility, placing it at the center of a surrealist Culture War, part II.

So, how do 11 seconds of a silent film become “hate speech”, resulting in blatant censorship; institutionalized homophobia and a resurgent disdain for body politic work that has defined American Art in the last four decades?

While attending this panel, I realized the inherent limitations of unmediated content in contemporary media. It’s like this: Donohue called this work “hate speech” based on his viewing of Fire In My Belly on YouTube. In all likelihood, he did not visit the exhibition and examine the context of this work — a video displayed in a kiosk, requiring the pushing of a button to be played. The 4 minute edit of this video was not looping prominently in the exhibition, it was actually quite discreet. A significant act of censorship has snowballed because of a video on YouTube: a user-generated, super low-quality illegitimate copy of Fire In My Belly edited not by Wojnarowicz or his estate; which included an unauthorized soundtrack by Diamanda Galas. The origin of the video is unknown or unclear. At the time of Penny Starr’s review, there wasn’t an official video of Fire In My Belly on YouTube.

The user-generated video collage featured Diamanda Galas’ This is the Law of the Plague, from Galas’ controversial Plague Mass, a requiem for those dead and dying of AIDS, performed live at Saint John the Divine cathedral in New York City in 1991. Plague Mass was also attacked by the Catholic Church in the 1990s, because Galas used biblical texts to criticize the Roman Catholic Church’s indifference to AIDS. So, what Donohue termed “hate speech” is actually Gala’s text on Catholic condemnation paired with Biblical passages showing the hypocritical context of such a condemnation. Galas had her own battle with censorship over this work, and won. Despite what some articles are reporting, Galas and Wojnarowicz never met, never collaborated. A friend of Wojnarowicz, Amy Scholder, confirms the two artists spoke a few times by telephone and admired each other’s work, but that’s it. Galas’ music was never a part of any edit of Fire In My Belly by Wojnarowicz, a fact easily proved by the Wojnarowicz’s extensive notes and sketches for the work. Fire In My Belly is an unfinished work. A work in progress, edited for display.

David Wojnarowicz “A Fire in My Belly” – Smithsonian, National Portrait Gallery Edit from ppow_gallery on Vimeo.

Apparently, the average time a viewer will spend with a moving picture is 37 seconds. To not push impatient audiences away, Fire In My Belly was edited. Every image in the 7 minute work in progress by Wojnarowicz was included in the 4 minute edit at Hide/Seek. Every image was included in sequence but truncated (cycles of repetition were omitted) and audio was added. Jonathan D. Katz highlighted the difficulty of showing a short silent film in contemporary museum settings. “To museum directors, moving images without sound look like broken kiosks.” To display this work with audio, Jonathan D. Katz and co-curator David C. Ward obtained an audio recording from the Wojnarowicz papers at NYU’s Fales Library and Special Collections. The audio piece was from an ACT-UP demonstration in June of 1989.

From a curatorial perspective, the audio recording was in alignment with the intent of Wojnarowicz as artist, activist and writer. By including this piece in Hide/Seek, the co-curators presented the complexities of living and dying during a time in art history when conservatism and censorship threatened creative expression; a time in history when homophobia and disregard for AIDS patients was a rampant display of political power. Removing this work from the show presents layers of irony, but real disappointment begins with the history-altering implications of censuring this piece. Not only does the removal of Fire In My Belly from Hide/Seek disrupt a proper narrative of the personal and social work and experience of LGBTQ artists in America, it is a censorship of American Art history in general, and an alarming step back for the progress of civil rights.

Ironically enough, for a show about visibility of queerness in American Art, Penny Starr’s review has guaranteed that this piece be viewed and discussed far more than if it had remained in the show, waiting for someone to press play on a kiosk. To denounce an unfinished work as “Hate Speech” (an assumption based on a user-generated, unauthorized collage on YouTube) raises questions about posthumous showings of works of art in progress. Marvin Taylor, Director of NYU’s Fales Library pointed out “Unfinished paintings are shown all the time, is it different when working with media?” What about the finished paintings by queer artists, on museum walls right now? Although publicly displayed, the queerness of their authors remains unknown to the general public. Will institutions lacking autonomy, under this political tone, find motivation to reveal the truthful histories of their art collections?

“This isn’t about aesthetics, it’s about history. This event highlights the importance of independent institutions. Without them, the fabric of history is shredded.” — Nayland Blake

This recent act of censorship raises further questions of how art can be properly funded in independent, non-disruptive, non-political ways. While a congressional investigation was enough to force the video’s removal from the NPG, both the Warhol Foundation and the Mapplethorpe Foundation have vowed to cease funding the Smithsonian unless the video is reinstated. In protest of censure, New York Artist AA Bronson has requested that his well-known Felix, June 5, 1994 painting be removed from the show. Nayland Blake noted the importance and role of “institutions as custodians and caretakers of history, not the vendors of the most palatable version.” While on the topic of the palatable, symbols of Christian mysticism are not new in Wojnarowicz’s work, a piece of art far less violent than still-image advertisements for popular video games and horror films released in the last decade (think Dexter).

Fire In My Belly remains an intensely personal meditation on the tragedies of living and suffering and dying from AIDS during the Reagan years. To me, this piece anticipates the corporate profiteering that has plagued AIDS research itself — a sort of plague within a plague. Just as art institutions need to independently manage their cultural agendas, medical institutions also need to divorce themselves from conservative institutions that dictate how medical research is funded. Morality has no place in medical and/or scientific advancement. As coins are thrown down at the viewer, or into a sick hand in Wojnarowicz’s video, I am compelled to make that connection, based on other juxtapositions in the film.

When Wojnarowicz takes a red string (blood) to unite two halves of one loaf of bread (the body of Christ), he juxtaposes images of his mouth sewn shut. This illustrates how silence can be equated with a separation of the divine body (humanity), and thus: the unsustainability of separateness in society. To censor is to divide. To separate is to perish. These are the key messages in a video being pawned in an act of political separatism from a fringe fundamentalist sect. We live in a fragmented political time, which consents the public display and discussion of controversial works only if they are held in contempt and regarded with disdain. As the arts community organizes protests and plans screenings of Fire In My Belly, artist Joy Episalla highlighted the importance of “not being distracted by bigotry, homophobia or ignorance.”

So, what have I learned from Culture Wars II? That Art is fragile, far more so than the artists who create it. Defending its public necessity and purpose requires a constant guidance of context, and the instillment of human dignity into a greater social body: a body politic constantly lacerated by myopic acts of political polarization.

Hakuin Ekaku, The Sound of One Clear Mind 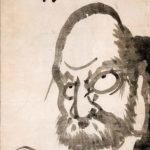