Back in January, On a drive home from seeing Hide/Seek a

Back in January, On a drive home from seeing Hide/Seek at the Smithsonian in D.C. Prof C and I had brainstorm to curate a fresh queer art show. We had been bitching about how conservative the selections of works for the Smithsonian actually were, despite the whole Wojnarovich controversy.

It seemed that with the plethora of influential queers that have shaped the history of art, from Michelangelo to Warhol (and all the luminaries in-between and subsequent) there is still no real queer discourse going in the mainstream art world—especially when it comes to women. In short, queers make the art world go ’round.

So within a few weeks we pitched the show DIS-COMMODIfY to the Bushwick arts organization SITEfest. We paired contemporary queer writers and artists together, most of whom had never worked together before. We asked them to create a collaborative work on the spot. No small feat for artists who are notorious loners when it comes to the creative process.

Last Sunday we premiered DIS-COMMODIFY to a packed loft. The Prof aptly described this as an art experiment in five acts. If I admired these artists before, this made me heart them all the more.

The show began with a video from Elisha Lim and Coco Riot from Canada.

Nancy Brooks Brody, a visual artist and one of the founding members of Fierce Pussy, with writer/musician Sara Jaffe (of Erase Errata fame), created a conceptual polemic on creativity and commodity.

Interdisciplinary artist Lee Maida’s video played as she sat opposit Jess Arndt who recited what I can only think to call “nouveau dada realism”. Their piece, “DIS-COMMODE” tied together (or untied) literary and visual refrences including ballons and Bataille.

And I painted the monologue by writer Anne-E Wood (who’s work I’ve admired for her vivid imagery). In Chinese painting this would be called a landscape of the mind.

Why Cindy Lauper is the Queen of Awesome 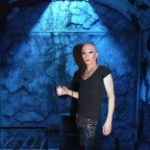 Censorship of Queer & Trans Identity in the Arts