Kim Jong-il had just celebrated his birthday when I picked up the program for disOriented. With the time change and all that, his birthday was really the day before, although I saw this play on the actual date of his birthday.

The morning after the play, I skimmed Reuters RSS feeds and saw a slideshow of the previous day’s celebrations in Pyongyang. I didn’t know about this when I settled into my seat, thinking about other artists, for whom exile is central. Like Mendieta, Neshat, Satrapi.

disOriented is a play by a Korean-Chilean playwright, Kyoung H. Park, about a North Korean-American family living in Queens, New York. Ju Yeon distanced herself from her Korean roots. While attending to a family crisis in Seoul, we see how her cultural roots are as deep as they are compacted. Ju Yeon returns to South Korea with her eldest son. A son longing for a heritage and lineage denied to him by complex maternal instincts.

It’s an intensely personal staging of servitude within defined order. In disOriented, servitude is expressed beyond strained gender roles and the subsequent built-up resentment of such confinements. The arc of servitude runs through military service, filial and female obligation, and expectations in the benefits of birthing free men. disOriented’s prevalent social matrix is one where women care for parents, children, households, and still lend a hand to the family business, as administered by the husband.

On a plane to South Korea, Ju Yeon, the central character, reveals to her eldest son “I’ll tell you one thing. I’m glad I only have sons. Imagine if I had a daughter…women have nothing but responsibilities. We serve…” During an argument, Dae Young tells his wife Ju Yeon to “look at the men in your family: they have no sense of duty.” The dialogue is consistently infused with such juxtapositions of where power and powerlessness rest in each defined role of male/female; father/mother; mother/motherland. Bicultural family drama is common enough, but disOriented explores that struggle through layers of double geographical exile, emotional escapism, political isolation, inter-generational gaps. “My mother told me that for many of her friends back in Chile, going to North Korea was a dream,” said Kyoung H. Park. “If I can share and explain what reunification and family means to Koreans, I think the play’s done its thing.”

disOriented shows the fragmented reality of a family—but also family as the highest value of reality: how the family measures up in comparison to other Koreans, as well as internal dreams and ambitions. It’s from that point of reference that the father/husband asserts that “This home, this family, this is what is real. From now on and forever: you will always be this.” Such dialogue made me think about how a sense of possessions (financial prosperity, college degrees, achievement) is often considered more real than what binds us together, as humans, as family. As custodians of dynamic ideas and as propellers of will. How we may gather around a celebratory table, grateful for shelter, meals, company, but despite gratefulness, that which unifies remains passive, unexercised. I can’t think of anything more urgent right now than to evaluate what we hold as ‘real’, and to untangle each sense of inherent unity.

disOriented is on a three-week engagement until March 5 at the Peter Jay Sharp Theater, 416 West 42nd Street, New York, NY. Box Office: (212) 279-4200. Exploring the role of the artist and creative modalities in political work, the following events accompany and expand the play:

Saturday, February 26: following the matinee performance, join the playwright, activists and professors in an interdisciplinary discussion on technique and implementation of political theater.
Thursday, March 3: the play’s writer, director and cast will be present for a post-performance panel discussion with the audience.

Go get your God back: Bishop Yvette Flunder on All Things God and Gay 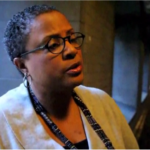 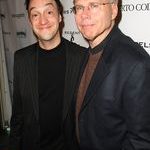