Seeing a master at their craft is rare, seeing two at one time is very rare. Having a roomful of them… unheard of.

Seeing a master at their craft is rare, seeing two at one time is very rare. Having a roomful of them… unheard of. Yet this was the case last week when Trisha Brown, Meredith Monk, Anne Carson, and Philippe Petit all converged at Elizabeth Streb’s Action Maverick Awards.

Streb’s annual Maverick Awards recognizes a person who “breaks rules, re-interprets/establishes new parameters of their craft in the arts, education, or science. A hero.” This year’s recipient was the trail-blazing Modern dancer and choreographer, Trisha Brown who Streb herself has credited as one of her early influences.

Even if its a sit-down dinner, Streb events are action packed. In addition the night’s honors, Meredith Monk performed two songs, and the poet Anne Carson read a piece inspired by Brown. The event was hosted by the hilarious Kate Clinton.

The real big moment came when Elizabeth Streb and Philippe Petit unveiled the high-wire newly installed at SLAM. Philippe Petit is the master of masters, he is “The” guy who walked the Twin Towers back in 1974, and who the documentary Man On Wire, which won the 2008 Oscar for best documentary, was made about. Petit will be giving master classes in wire walking to six serious artists this summer at SLAM.

I know high art (or high-wire art for that matter) is often not easily understood. You say “Modern” or “Contemporary” and people often go, Huh? But consider this; the entire foundation of Pop-Culture and Entertainment rests upon the inspiration of heroes such as these who have put their craft — their art above all else.

So if you get a chance to see any of these people, you run, not walk. Streb’s “Run Up Walls” performance ends May 23rd. I hope I’ve convinced you to go, you will thank me later.

Petit and Streb unveiled the wire before a wrapped crowd, then christened it with its first walk. Its times like this that you just gotta pinch yourself, and fortunately I was able to shoot the walk while doing so. Both Streb and Petit are 60 this year, hard not to feel the kismet between them that goes well beyond their shared years.

Eyjafjallajökull’s Death Ash and The Sublime 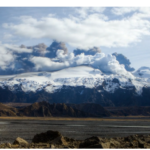