For the fluff aficianados among us, Pop Culture Christmas 2010 has just been heralded!

For the fluff aficianados among us, Pop Culture Christmas 2010 has just been heralded! That’s right, the nominations were announced this morning by MTV for the 2010 Video Music Awards. And at the head of this year’s class? Unlikely couple Lady Gaga and Eminem. You may remember last year’s ceremony for Gaga’s breakthrough (and bloody, literally) performance of “Paparazzi” and for what turned out to be, arguably, the most mocked pop culture moment of 2009: a drunken Kanye West interrupting Taylor Swift’s acceptance speech for Best Female Video. 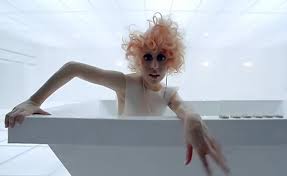 Gaga is up for a record-breaking 13 nominations, including two nods for Video of the Year (for “Telephone” and “Bad Romance”), marking the first time a single artist has ever had two videos in the running for the night’s top honors. Eminem snagged eight nods, including “Best Male Video,” and “Video of the Year” for “Not Afraid.” Not too shabby (for a douche). Beyoncé racked up five nominations for “Video Phone,” her collaboration with Lady Gaga. But of course, both Bey-Bey’s “Video Phone” (featuring Gaga) and Gaga’s “Telephone” (featuring Bey) are up for Best Collaboration. I love it!

If this year’s awards ceremony turns out to be even half as entertaining as last year’s, the internets will be abuzz with talk of it for weeks. Will you be tuning in for the festivities on September 12th? Any predictions regarding this year’s most talked about VMAs moment-to-be? Last year Gaga brought Kermit the Frog as her date. This year I’m hoping she shows up with Miss Piggy dressed like Beatrix Kiddo and driving the Pussy Wagon!