Sometimes hearing hard truths are easier when packaged in poetic verse. This is how Lenelle Moïse writes when telling stories of her youth, her homeland and details taken from news headlines, recently published as a compilation of poems in “Haiti Glass” (City Lights | Sister Spit.)

but how
can cruelty sound
so beautiful?
madivinez
sounds so glamorous.
something i want
to be. madivinez.
my divine?
sounds so holy.
(- Madivinez)

Madivinez is derogatory slang for lesbian in kreyol, and this clarifies my point. How does one make something so cruel sound so holy? “Haiti Glass” reflects a body of work that Moïse has been crafting for almost a decade, written primarily for performance, these poems read just as lively on the page. Hard to believe then that this is her first book, which captures her passionate live performance in a way one can linger a little longer and study a little more closely her precisely chosen words.

Moïse’s poems range from memories of childhood growing up in Haiti and American, to stories from her homeland marked by the atrocities of abject poverty and environmental disaster. Moïse’s work is always self-reflective, political and personal navigating the hurdles faced by black and brown immigrants in a promised land full of gated privilege. Her verse investigates the underbelly of family and society looking starkly at sexuality, violence and hope as it confronts despair.

long before they have grown
their first stubble
they are trouble
bubbling in the wake of rubble
of psychological warfare
come flesh a poet will tell you
a thousand times
this shit is not poetry:

Moïse’s has been a fellow at the Huntington Theater Company, and a poet Laureate of Northampton, MA. She is a recipient of various awards from the Astraea Foundation and the Gaea Foundation as well as others. Her performances have taken her across the country from college campuses to theaters. Moïse perfomances are a blend of music, dance, and spoken word—a record of turning life into art.

For the daughters of immigrants
who rest under projects ceilings.
we are our parents’ only investments.
(- we live up here) 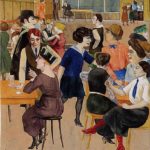