I may or may not be over exaggerating this point, but this morning Diana Cage sent me an email with this subject line “Did you know On Our Backs was the first ever magazine published on a

She included this link to founding editor Susie Bright’s tribute to Jobs’ passing last week. In her post, Bright recounts the early years of OOB, the financial barriers to not only printing but type-setting and laying out a publication back in the mid-eighties. 13,000 issues of the 1986 Winter edition of OOB was created on a 1984 Mac using Pagemaker 1.0. Unbeknownst to Bright and then publisher, Deborah Sundahl, they were the first magazine to have done so.

Of course, by the time I got around to creating Velvetpark in 2002, desktop publishing was the standard. The barriers to entry into publishing were near to nothing. We took this all for granted.

In Steve Jobs commencement speech to the class of ’05 at Stanford (the speech already a viral video, has amassed several million more views since last week) he tells the graduates about dropping out of Reed College only to drop in on classes he wanted to take. Jobs took a font making course while hanging out at Reed, and became so fascinated by serifs and sans-serifs, that when he and Steve Wozniak began creating the first Macs, Jobs insisted on the computers having the ability to reproduce libraries of fonts.

This graphic fascination lead to Macs becoming The Computer for everyone in the the publishing and design industry. However, leave it to the lesbians who broke ground in the industry by being the earliest of adapters.

To share a piece of this amazing Herstory you can download the first Mac edition of OOB from Suzie Bright’s blog here. 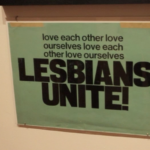 A Single Lesbian’s Quest for Motherhood