Home » Lady Gaga v. Madonna Smack Down: Just Who is The Greatest Pop Diva Ever?

Ever since Gaga’s “Born This Way” song debuted it immediately reminded me of Madonna’s “Express Yourself”.

Ever since Gaga’s “Born This Way” song debuted it immediately reminded me of Madonna’s “Express Yourself”. So today I finally got around to googling both video’s then doing a quick youtube search for “Lady Gaga v. Madonna” and discovered, as usual I’m late to the game, people have been debating this issue for months now.

Check this mashup if you really need a reminder:

I’ve resisted the Lady Gaga/Madonna comparison because I like pretending to be a magnanimous equality conscious culture critic and say that every generation produces a Diva or two that really moves the culture from the depths of our lowest common denominator. Plus I know it brings up fervent passions of loyalty and hysteria from the Monster crowd. And the internets are rife with the comparison between the two, what could I possibly add to the discussion… However, since I wasted the morning watching Gaga and Madonna videos I’m going to share with you, dear reader, what I found so I don’t feel like I’m just googling my life away.

Before we begin with the smack down I want to acknowledge the importance these queer icons have played in our visibility, though points for Gaga at being a much more outspoken advocate. (i.e. Gaga’s VMA’s 2010 big gay shout out):

Anyone remember (or was alive for) Madonna’s 1993 opening performance for MTV’s VMAs, a butch/femme tribute to Marlene Dietrich? This was, afterall, the “Don’t Ask Don’t Tell 90’s”…

So lets back to “Born This Way”, produced by Lady Gaga, Jeppe Laursen, Fernando Garibay, Paul Blair and DJ White Shadow. I mention the producers because they have just as much pull in how a song is crafted as the artists.

Madonna “Express Yourself” Written and produced in collaboration with Stephen Bray

Another comparison I came across, while not as closely linked— but still there are echos:

I really don’t think Gaga would have the level of performance sophistication without Madonna’s experiments in theatricality. I mean that MTV VMA “Vogue” performance, which was considered ground breaking at the time, was 21 years ago for chrissakes?

We all have to stand on the shoulders of giants right? And someone on the “Born This Way v. Express Yourself” YouTube thread pointed out that “Express Yourself” was inspired by The Staple Sisters’ 1971 hit, “Respect Yourself.” So take that you Pop Diva copycats! 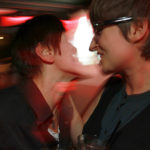 Feminists Know How to Party