Hi everyone I wanted to let you know that Velvetpark will be at this weekend’s National Lesbian and Gay Journalist Association Conference in Philadelphia.

I’ll be hosting a panel called “Lesbian Media: Voices on The Vanguard“, with Merryn Johns of Curve, Kat Long of GO, Marcie Bianco of cherrygrrl.com, and independent photojournalist Angela Jimenez. We will look back at the history of lesbian media, and how it has developed in the twitified 2.0 environments of today. And we will be exploring the ways in which lesbian media creates original content in an age of aggregation as well as the hurdles independent lesbian media owners face in maintaining and sustaining their brands.

Marcie Bianco is defending her PhD dissertation on Marlovian drama and ethics this fall. She also holds degrees from Harvard (AB Hon), Oxford (MSt), and Rutgers (MA), where she also lectures on Shakespeare. Marcie has been with Cherry Grrl since the spring of 2010; prior to this, she was a contributing writer and editor at Elevate Difference (formerly The Feminist Review), and she has published pieces in both scholarly journals, such as Early Modern Literary Studies, and lesbian magazines, such as Curve.

Angela Jimenez is a freelance documentary/journalism photographer based in Brooklyn, New York. She is a visual storyteller, working on a wide range of subjects. She is a regular contributor to The New York Times and The Newark Star-Ledger and a contract photographer with the Getty Images creative department, as well as a contributor to Velvetpark. Her work has been honored by the Magenta Foundation, New York Press Photographer’s Association, Review Santa Fe, the Communication Arts Photo Annual and supported by grants from The Alexia Foundation student award and The Puffin Foundation.

KAT LONG is the author of The Forbidden Apple: A Century of Sex and Sin in New York City (Ig Publishing), the first book to explore more than 100 years of sexual history in the city that never sleeps. Currently, Kat is the managing editor of GO, America’s leading free monthly magazine for the LGBT community. She was the editor-in-chief of the New York Blade, the city’s only gay-owned LGBT newspaper, until June 2009.

I hope we may see a few of you there!

The F*cking World According To Molly 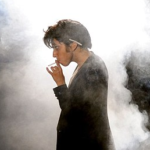 Gaga in Drag At the MTV VMAs