For the third time in five months, I’m writing about another female artist with ties to Iowa.

For the third time in five months, I’m writing about another female artist with ties to Iowa. Mendieta and Ewing both attended the University of Iowa, and Laurel Nakadate lived there before moving on to Boston’s Museum School and Yale.

Only The Lonely is the first major museum exhibition of photography, film and video by Nakadate. Now at MoMA’s PS1, the show premieres her recent photographs, 365 Days: A Catalogue of Tears, a series in which the artist documented herself before, during and after a performance of daily weeping. Nakadate’s work deals with “voyeurism, loneliness, the manipulative power of the camera.”

The main character in most of her work (with the exception of two feature length films), Nakadate relies on her nubile body and those captivated by her girlish whims. From the description of Little Exorcisms, the artist explains her work as “…little performances in which I investigate how small rituals, personal exorcisms, actions, and visceral reactions bump up against the larger world and the strangers I meet as I navigate through transient places.”

For the majority of her work, Nakadate has engaged men who mack on her. But not your average guy. She specifically seeks out strangers invisible to society: the older, unfit, dismayed and unattractive loner in towns most of us haven’t heard of. Nakadate talks back and turns them into her captive audience, her mesmerized collaborators. She meets them on the street, at grocery stores, or in parking lots—Home Depot lots are especially sociable.

Initially, she started going into men’s homes with a camera and creating performances. Like a telephone game of sex talk, or games of playing dead as seen in Beg For Your Life. In another construct of pretend, Happy Birthday shows Nakadate in the homes of three men, each singing Happy Birthday to her as she sits by, candlelight flickering in her eyes, a gaze proving her own lucidity by affirming control to the camera. And lucidity is key. She has not befriended them, but worked with the same group of men over the years. Most of them show signs of significant social disconnect. Definitely something more than profound melancholy or psychological isolation.

Nakadate documents her need to connect with strangers and the delicate state of what passes for contact. Purposefully, she turns the tables and shifts the balance of power from an everyday cat call into a mutual cure. A performative tonic for a loneliness craving the company of fantasy. Inevitably, layers of exploitation become topical. And not just the exploitation of the men’s isolation and desires, but of their entire collaborative spectrum. In interviews, the artist has stated: “I wanted to perform small acts of drama.” In doing so, Nakadate plays the seemingly innocent flirt who manipulates male adults into utter bewilderness. And they both love it.

Without moralizing her process, she knows the danger she presents to the men (irresistible beauty) and they to her (possible violation). There’s an anti-climatic delight in that she has no horror stories to tell, and finds their company comforting and interesting. Yet, video is used as a hunter and gatherer of circumstantial material, charged with self-awareness and the provocative sensationalism of pervert gaze—something Calvin Klein was castigated for doing in the late 1990s with a CK Jeans campaign but similar aesthetics are currently exercised in American Apparel adverts.

Nakadate’s pop cultural references are far from random. Her vignettes of lonesome excursions are accompanied by Chopin, Satie, Lily Allen and the generic cock rock of FM radio. In American Gothic Nakadate is dressed in all-American blue jeans and cowboy boots. She performs a casual pole dance on the front porch of the same house Grant Wood used for his painting American Gothic. Studied and rehearsed, her movements highlight the hilarity and constriction in a choreography typically performed for audience titillation. My laughs didn’t last very long, because I then saw another video, in which Nakadate is dressed in a sexy French maid outfit, stripping for a dog in a romantic, ornate hotel room. The dog humps her leg repeatedly and quite ferociously.

Good Morning, Sunshine is uncomfortable to watch. Similar to the shady, casting call manipulations satirized in the CK Jeans campaign, this video focuses on intrusiveness of power behind the camera, only Nakadate doesn’t push. By constantly reminding each adolescent girl “You know you’re pretty, right?” her subtlety is as disturbing as it is pure commentary. Here, Nakadate becomes the manipulator, violator and director of narratives meant to intrude, impose and undress. I watched some viewers becoming offended, confused or walking out. Eventually, three teenage boys sat next to me, watching the video. After a few minutes, one of them said to the others, in a low voice: “What’s the point of this. Do you wanna go?”

Laurel Nakadate, Farther From Home Than I’d Ever Been, 2007. From Fever Dreams at the Crystal Motel. Copyright Laurel Nakadate. Courtesy Leslie Tonkonow Artworks+Projects.

It’s unsettling to watch a video about the protective pathologies of non-urban female adolescence, and the power games they are susceptible to. But with authority’s timber and pitch tipped towards the effeminate, it becomes more disturbing. When narrated by male voice, exploitation is blatant. If a trailer for Good Morning Sunshine featured Don LaFontaine, it would be unsettling, but acceptable as norm of cinematic drama. However, when a female voice inhabits the position of manipulator, it is far more disturbing to people but meriting less articulation of why. When I asked a few female viewers what made them uncomfortable, they couldn’t place it into words. When power roles are flipped, why is commentary more disturbing than dramatization?

With her series Lucky Tiger, Nakadate photographed herself doing pin-up poses in various locations, as she traveled around the United States. She then mobilized a group of men via Craigslist to meet with her, press their fingers on an ink pad, then pass around the Lucky Tiger photographs amongst themselves. Where fingers have and have not left their mark shows exactly what men were focusing on and how. Typically, viewers of printed material for arousal aren’t confronted by the depicted, in the same room. Yet, this is the dream: being in the same room with the pretty girl with the sexy body. Using ink on their fingers hints at criminality, but is there criminality in setting them up? It’s a decidedly aggressive gesture. That fingerprint ink is difficult to wash off, extends the event into one of fantasy branded by touch for the men. A lingering impression of held/not held, friction and ridge.

Nakadate’s vision emerges from a pretend world, riled by “visual truth and narrative fiction” culled from adolescent activity and games of vulnerability. She observes the language of how adolescent girls are communicated to and duplicates those methods by turning the tables. With her cunning alter-egos, she (possibly?) preys on the men society discards. Because her work is not self-portraiture, the collection of her female characters could be dubbed The Imaginative Solitude of American Girls With a Dov Charney-approved Lolita Complex. As commentary, it’s a powerful survey. 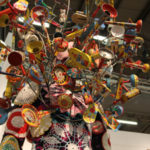