Lilac leather and horsehair, plumes, coiled aluminum, pheasant feathers and resin vulture skulls—none of these are the typical materials of a functional wardrobe.

Lilac leather and horsehair, plumes, coiled aluminum, pheasant feathers and resin vulture skulls—none of these are the typical materials of a functional wardrobe. But Alexander McQueen never settled for typical. Savage Beauty currently at the Metropolitan Museum of Art examines the contributions of McQueen’s audacity and incessant purveyorship of the Sublime. Tailoring garments with aesthetics beyond practicality, McQueen was both master craftsman and conceptual leader. Such double strength was apparent in the critical risks McQueen took with the female silhouette. Like performance artists, McQueen worked through the figure as an instrument of spatial movement and canvas for commentary.

There is an insuppressible flair of challenging attitudes, sewn right into the clothes, so defiantly stitched that it seems impossible to ever feel weak wearing such things. I suspect that no one ever really wears a McQueen—instead, one inhabits a psychological state. Savage Beauty shows how McQueen’s early sophistication evolved into paradoxical relationships rooted in autobiography: the macabre palates of Jacobean portraiture, anarchy, gender play, sexuality as a “masquerade”, Victoriana.

“I want to be honest about the world that we live in, and sometimes my political persuasions come through in my work. Fashion can be really racist, looking at the clothes of other cultures as costumes…That’s mundane and it’s old hat. Let’s break down some barriers.” — Alexander McQueen, Nylon, February 2004

McQueen’s modernity seems purely inevitable. As someone who set out to “demolish the rules but to keep the tradition”, McQueen was blatantly political with his collections. From the body politic to social issues like famine and environmentalism, each collection communicated a message. Runway presentations were deliberately extravagant and confrontational, but always in the service of a point he set out to make.

Although criticized for being about female rape, the collection Highland Rape was McQueen’s direct comment on the English occupation of Scotland in the 18th century: “What the British did there was nothing short of genocide.” A political story was told with dresses torn and tattered lace. Slashed green leather (bracken and moss), fragmented tartan (clan disunity).

“I want people to be afraid of the women I dress.” — Alexander McQueen

With Sarabande, the construction exagerates form in the porportions of female fertility figures, but with this dress the the abdomen is muscled—just one of the many ways in which McQueen exercised not just a play of contrasts in his work, but a manner of dressing women with a defiant assurance, instead of an inviting vulnerability.

Despite his desire to “transform mentalities more than the body”, McQueen was very demanding of silhouette. McQueen’s corsetry was more about protection than adhering to societal forms of femininity. Spine Corset is decidedly armor, not a shaping device. Coiled Corset was described by McQueen as being sadomasochistic, yet comfortable to wear. Neither of these corsets shrink the existing body shape.

The wide hips of fertility figures, Victorian era and eventually the 1950s, is revisited again with Dress (The Horn of Plenty), a striking piece designed entirely in shiny black duck feathers. Dress reads like an embodiment of the darker strengths of the McQueen aesthetic: Romanticism, poetry, Hitchcock and fetish wear. Edgar Allan Poe’s “shadowy fancies” from The Fall of the House of Usher are prominent throughout McQueen’s work. In Dress, Poe’s The Raven emerges full of melancholy and stamina—much like McQueen’s creative legacy.

Savage Beauty is on view at New York’s Metropolitan Museum of Art until August 7, 2011. 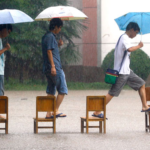 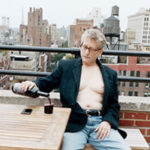