I was thrilled to receive a handsomely-packaged asphalt gray PR kit several weeks ago from the Brooklyn-based fashion duo Crystal González and Ivette Alé.

I was thrilled to receive a handsomely-packaged asphalt gray PR kit several weeks ago from the Brooklyn-based fashion duo Crystal González and Ivette Alé. The young designers, who I met in person at the most recent Feminist Press fundraiser, have taken on the mantle of butch-queer-trans-masculine fashion with their freshly launched label “Marimacho”. (Marimacho, denotes “tom boy” but connotes “dyke” in Spanish.)

Before I introduce you to their brand, I want to give a shout out to two incredibly important women who in the early aughts aspired to and created a style in queer fashion we could call our own.

Parisa Parnian created Rigged Outfitters, back in 2004 with a vintage inspired line of clothes for butches. Her designs appeared on The L Word, as well as on the backs of every dyke from Brooklyn to San Fran. One of Vp‘s top 25 queer women of 2010, Parinan has since become a lead designer of Men’s fashion at Guess.

Similarly, Niki Cutler of DITC with her emblematic logo, gave a generation of young queers a subversive branding statement they could take to the streets in.

It’s with fond memories I recount the many MichFests, Dinah Shores, and a Gay Games we spent side by side hawking our products (me with Vp magazine). They each brought a vision of a queer women’s and trans masculine fashion into our community, the likes of which had never been envisioned or made manifest before.

With the closing of Rigged a couple of years ago and the winding down of DITC, there was void in queer fashion just waiting to be filled…

Crystal González and Ivette Alé both studied economics, yet with a shared desire to dress masculine identified women the duo have stepped up to the challenge. Much like Parnian before her, Alé has years of experience working in the apparel industry and Crystal works in management consulting for large corporations. If anything, along with vision and hella passion, a small dyke operation needs business acumen.

Crystal’s aesthetic impulse stems from being a masculine-identified woman with nowhere to shop, and Ivette’s roots in Los Angeles’ rockabilly scene have inspired her to create designs from music subcultures and mid-Century “dandy” fashions.

Marimacho launched their Spring Collection just over a month ago, and the clothes will soon be available on their website. We’ll be keeping more than just an eye on this team—I hope to visit them in their studios soon. 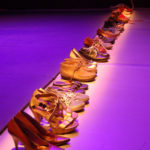