Tonight begins NewFest, NYC’s LGBT Film festival. If you, like me, did not jump on the bandwagon early, you will find out that the new Rose Troche film “Concussion” is already sold out tonight. Do not fear, there are more films, more showtimes but don’t sit around on your duff, buy your tickets now or they will be sold out by days end!

Be sure to get your tickets for the award winning, “Who’s Afraid of Vagina Wolf?” by filmmaker Anna Marigarita Albelo. Recipient of the Grand Jury Award for Best Actress at 2013 Outfest Los Angeles, “Who’s Afraid of Vagina Wolf?” promises to be another witty, satrical, look at queer culture by this emerging fimmaker. In this all female cast, featuring Janina Gavankar (The L Word, True Blood), Guinevere Turner (Go Fish) and Carrie Preston (True Blood, The Good Wife) and starring Albelo, the plot—perhaps not far from life—portrays a 40-something, loveless, jobless filmmaker in LA who becomes enchanted by a lucious new muse. 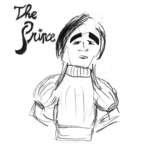