Home » On Sex and Sameness

On April 1, Susan Burns visited the National Portrait Gallery in Washington D.C. She came across a painting by Paul Gaugin, on loan from New York’s Metropolitan Museum of Art.

On April 1, Susan Burns visited the National Portrait Gallery in Washington D.C. She came across a painting by Paul Gaugin, on loan from New York’s Metropolitan Museum of Art. Two Tahitian Women is part of Gauguin: Maker of Myth which is at the NPG until June 5. Beating the acrylic shield with her fists, Burns attempted to take the painting down herself, and called it “evil”. Recent reports clear the painting of any damage, but Burns remains charged with destruction of property and attempted theft. Her reasoning? Burns has stated the following: “…the painting is very homosexual. I was trying to remove it. I think it should be burned … I am from the American CIA and I have a radio in my head. I am going to kill you.”

Unfortunately, the National Portrait Gallery opened themselves up to these actions. It is the price of censorship. By removing something deemed “sacrilegious” (but really meaning homophobic), the act of censuring places everything on NPG walls under the same scrutiny. This recontextualizes how people view art unrelated to homosexuality or religion, as is the case with the Gaugin. This act quantifies the public disservice of appeasing political agendas, rather than defending the rightful place of expression.

These two women appear in more than one Gauguin work, but this painting in particular he called his “Tahitian Eve”— a female quality of subtlety and wisdom but “still capable of walking around naked without shame.” The reactionary attempt at attacking a depiction of homosexuality, is in ironic conflict with the painting. It is a symptom of cultural repression that a Western woman cannot view a homosocial scene with ease, or thoughtful criticism, that only a context of sex can justify nudity.

There seems to be shock at how someone dared to attack an 80 million dollar painting. As if the value of an image is indifferent to what it represents! Appreciation of beauty has been replaced by a policing so dependent on political rhetoric that discernment is no longer an option. It’s ridiculous enough that homosexuality is viewed as worthy of attack. But it’s equally disturbing that two nude women together are viewed in a sexual context, as if the female body is only worthy of judgment, and in equating beauty with sex. 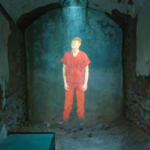