Home » Passion, Pregnancy and the Promise of the Rapture

Long before I got knocked up, or more accurately, as soon as I paid all that money to get myself knocked up at the Batzofin Fertility Clinic, people told me how amazing my sex life would be when I

Long before I got knocked up, or more accurately, as soon as I paid all that money to get myself knocked up at the Batzofin Fertility Clinic, people told me how amazing my sex life would be when I did get pregnant. I was sure to be a ball of sexual tension with all those pregnant hormones racing through my already passionate blood. Strangers and friends alike would go on and on in hushed and breathy tones about the multiple orgasms, the lack of inhibitions, the sexy monster that would come with the certain rise in libido. I was a bit apprehensive about what new heights of daring this rabid sexual awakening would bring for this already liberated lesbian. In short, I was a bit worried about what it would make me do. I imagined myself, gigantic belly and breasts heaving, barely balanced on the sink of some dirty bathroom in Brooklyn, pinning my then lover to the wall, begging her to “Please, please, baby, touch me on the inside,” while she squirmed to avoid falling onto the pee-stained toilet seat, trying not to hurt my hormonal feelings, lest she be left dealing with the wrath of a pregnant woman scorned.

But to be completely candid, I was also looking forward to it.

As I get older, I find myself less inclined to run my hands up my lover’s skirt if there’s a chance someone else might see. I remember with such giddy pleasure, when a roomful of preachers (or poets in Chicago) could not stop my girlfriend from doing the sort of things I cannot write about here. We were young and had no qualms pretending to listen to the angst of some earnest performer reading from a tattered journal about some lost love or unrequited fervor. The only ingredients we required to cross these lines of impropriety were desire and poor lighting. These days I am so much tamer. I’m actually almost boring myself. I don’t know if it’s just the years, or the series of failed relationships behind me, but against my will, I am acquiring a sense of respectability. So this impending period of wild abandon, this era of uncontained eroticism was something I was really looking forward to experiencing.

Then the week before I got pregnant my relationship ended.

And when did I find out I was pregnant all the joy and relief and expectation for the child to come was mixed in with the sorrow of mourning my lover. I was sad about her leaving, but I couldn’t help being more than a little pissed that I was going to be without a lover during this magical time of legitimate wantonness. Then I quickly did the math and told myself to calm down. The timing was actually a good. It usually takes me about three/four months to come to grips with a breakup. And everyone knows the first trimester is filled with morning sickness and anxiety and a lot of waiting to see if the pregnancy will last. There wouldn’t be any lightning bolts sparked in my underwear for at least another three months. There was no reason to think I was going to miss out on the harlot trimester. I gathered my courage and took to the business of mourning my relationship and adjusting to the trauma of nausea and vomiting and whatever surprises were to come in those first twelve or thirteen weeks.

I suffered those first three months with unflagging courage. I knew the upheaval was only to last about ninety days. The second trimester was the one to look forward to. It was then that I would glow, then that my pheromones were to waft seductive through the air and catch women unawares. I was assured that all panties would feel the heat of that fervent desire for my flesh, and that I was to be open to it. Hormonally speaking, there was no way to avoid this. The rapture would take me over. Like the Holy Spirit in a Pentecostal Baptist church on Good Friday. I would be helpless in the face of my own ecstasy. All I had to do was to get through the first trimester. My stoicism would be rewarded in the fourth, fifth and sixth month of hosting another life inside my body. I waited patiently. And got new batteries for my sex toys. And bought new lube. And I tried my best to mourn my ex quickly. I didn’t want to find myself in the throes of passion, limbs wrapped around some smart, sexy, feminist, lesbian getting a flashback that would reduce me to sobbing, Why did she leave me? Or, Wasn’t I good enough to make her stay? I wanted to be prepared, open to take full advantage of this hurricane of erotica that was to come. I wanted to be recovered from any heartbreak, ripe and ready for those promised multiple orgasms, the madness that would make me do the unfathomable.

Week twelve came and left the nausea. Week thirteen passed with my head still in the toilet. Week fourteen brought vaginal bleeding and bed rest. The diagnosis of a low-lying placenta made my lack of sex official. My doctor prescribed no vaginal activity, no orgasms, until the placenta moves up. Needless to say, it became a blessing that there was no sign of my libido. I don’t know what I would do if I were in fact experiencing the promised state of heightened desire and had to abstain. As things stood, I didn’t have to worry about any of that. Sure, my breasts grew sore and swelled. My hair grew lustrous and tumbled wildly round my face. My hips widened seductively and my skin cleared up nicely. I was the picture of fecundity. But inside me was pretty much without an ounce of desire. Whenever I thought about sex my stomach churned and I gagged. I couldn’t imagine being that close to anyone, let alone kissing them on the mouth, or anywhere else—ugh! If the season of sexual frolicking was promised, it was definitely not yet fulfilled in my softly changing body. Even as I approached week twenty, the slightest scent of another being was enough to send me retching.

At week twenty-five I finally accepted that this sexy perk of passion in pregnancy was not to be mine. I mourned the loss of yet another fantasy I had about the process of procreation. Those weeks felt as if they would go on forever. I admit they were the darkest of the pregnancy so far. Everything seemed unbearable. I felt singled out, picked on—like God, or the Devil, or Fate, or all three, were out to get me. I doubted myself, and wondered if this experience was retribution for being openly gay, or being so foul-mouthed, or being so outspoken about the sex I so enjoyed with beautiful women. In those weeks, I was nothing like the warrior dyke I so prided myself on being when I began this journey toward motherhood. And I was too weak to feel any shame in that. All I could do was to get through each day with enough food staying in my stomach to keep baby and I alive.

As I approach week thirty, I am beginning to see the light. Five days ago I put my treadmill in storage to make room for the crib that my friend, Walter, is buying. I am almost settled on a name for the little one. Baby gifts have begun to arrive. I had to clean out my ex’s dresser to make room for the tiny t-shirts and blankets and booties. It still seems impossible that there could be another human being living in my apartment in January. I’m still cautious, but I am definitely looking forward to the changes to come. I’ve heard the stories of sleeplessness, and breastfeeding drama, and all night screaming episodes. But something inside me cannot help but think a miracle is on its way. Maybe I’m setting myself up for more disappointment, but cynical as I am, I would like to think a little faith is not a bad thing. Time will tell, I suppose.

And I must say I am looking forward to having my body back. Though I hear breastfeeding exclusively means you don’t really own your body just yet. But I won’t be throwing up, and I will be able to bend again and stretch and move without the obstacle of the abdominal basketball I have been navigating for months now. And I am particularly excited about the possibility of my body being aroused again. I dream of being laid out on some handmade quilt on a bed in Kingston, lean and limber again, at the mercy of a woman who has known my body for years. I can imagine evenings in Brooklyn, with new hands, and agile mouths traversing the changed terrain of my softened post-pregnancy contours. I can almost feel the skin under my own fingers as I trace the magic of my next lover’s hips, her navel beneath my cheek, the small of her back on my forehead, my—I may even break some old records, do some things I was too scared to do before I got pregnant—such is the glee that accompanies my anticipation. Some nights I can hear the sounds of my own pleasure, far, far away, in that parallel universe not yet lived, and though I am not yet standing full in that experience, I am hopeful, and humbled by the possibilities fomenting inside the unpredictability of life.

I am making note of the changes, collecting them as evidence of my humanity, my vulnerability, my ability to adapt, to stay alive through difficulty. I am also hoarding new fantasies, tallying them for future reference. I intend to make up for the trimester of sex I missed. I am planning to cheat fate. I am hoping to bring to fruition a post-pregnancy surge in libido. I have never heard of it, but hope is the mainstay of most miracles, so I am stacking my hopes, and begging the gods for a flash of lightning, a burst of pheromones, and the willing company of a lesbian or two to speed the rapture of this poised but pulsing body toward some sweet release.

Mickalene Thomas: More Than Everything 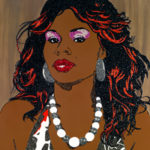