Home » Protest at The Smithsonian, Marching with Barbara Hammer

This past Sunday 500 protesters, including queers from the ActUp days, artist who care about censorship, and various art world luminaries, marched from the Metropolitan Museum of Art to the Smithso

This past Sunday 500 protesters, including queers from the ActUp days, artist who care about censorship, and various art world luminaries, marched from the Metropolitan Museum of Art to the Smithsonian’s Cooper Hewitt Design Museum.

The protest was a response to the censorship by the Smithsonian  when it pulled “Fire in My Belly” out of the Hide/Seek exhibition in D.C. after coming under pressure from GOP congressmen. Read the background on David Wojnarowicz’s work by Patricia.

Also worth a read, on Wonjnarowicz’s life and background, is Holland Cotter’s piece in the New York Times.

The protest was organized by ART+ and spurred on by art critics like Jerry Saltz, who penned this open letter to the 111th Congress:

Right now, during the season when many children are passing through the Metropolitan Museum of Art on their way to see the Christmas tree, there are on view numerous Greek vases that depict men with erections, many of them cavorting with one another; paintings of children standing on their mothers’ laps and urinating; multiple depictions of mothers breast-feeding infants; scores of Oceanic wooden sculptures that depict male figures with enormous multiple penises; Rene Magritte’s painting showing only pudenda covered in a damp mat of dark pubic hair; Francis Boucher’s naked woman alone in bed rubbing her vulva on the bedsheets… I think that any public funding to the Met should be curtailed until all of these items have been looked into and removed.

According to Julia Bolcer at the Advocate, “The protest is the largest in years in the city to coalesce around an art exhibition, aimed to send a message from the heart of the art world.”

I caught up with pioneering lesbian filmmaker Barbara Hammer, and here’s what she had to say. 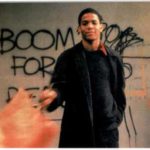