Last weekend, the New York Times asked over a dozen gay men, two lesbians, and one “v” about

Last weekend, the New York Times asked over a dozen gay men, two lesbians, and one “v” about “the gay film that changed [their lives].” Dismayed, but not at all surprised, by the piece’s blatant lack of diversity (not to mention its egregious butchering-aka-“editing” of Mx. Bond’s piece), we decided to do our own survey on life-changing queer cinema. We put out a call to filmmakers and cultural commentators to answer the question “What film first informed and shaped your budding queer conscious?” We are grateful for the responses that we recieved in such a short time frame.

One very influential LGBT film for me is Black is, Black Ain’t. I constantly refer back to this moving documentary for the style and tone that Marlon Riggs and his collaborators used to include so  many voices about blackness in such a powerful and expansive way.

Sarah Schulman, author of The Gentrification of the Mind; screenwriter of The Owls and Mommy is Coming; co-producer United in Anger: The History of ACT UP

The first important lesbian images in cinema for me were: Liv Ullman and Bibi Anderson in Ingmar Bergman’s Persona, particularly the moment where their intensity of feeling burned up the celluloid and (the great) Dominique Sanda as the lesbian wife of an anti-fascist professor in Bertolucci’s The Conformist.

I have found myself thinking about Marlon Riggs’ film Tongues Untied a lot lately. I first saw it in the Castro Theater in San Francisco 1991 and was deeply affected by its poetic, forceful and unflinching portrayal of the experience of men of color in America. As a feminine white queer I found it resonated very deeply with my own experience as well and continues to do so. Twenty years later on we have an African-American president in Washington and a national conversation about gay marriage is under way but even today low-income, deeply religious communities continue to persecute their children for the same “reasons” they did in this amazing revolutionary film.  I would encourage anyone, gay or straight to watch not only for the political and social issues it addresses but more importantly, to me, for the haunting beauty of the words of Essex Hemphill. [This is the original entry that the NYT then edited; read more about this entry at v’s blog.]

[T]he film that changed my life in terms of saying, “OK, that’s what I’m going to do—be a filmmaker,” was Desert Hearts. But the film that changed my sense of what it means to be in love as a lesbian and how I wanted to tell a lesbian story was Entres Nous, a beautiful French film by Diane Kurys. Entres Nous, like so much Euro film, is full of tiny details, scenes that don’t do what every screenwriting teacher barks to her class of novices, “if it doesn’t move the story forward, cut it.” I happen to believe those moments add texture, level, and nuance that are so often much more interesting than an oft-repeated formulaic “hit-the-act-breaks by the page number.”

When I was 11, I saw in my hometown newspaper, The Lawton [Oklahoma] Constitution, an ad for a film called I Want What I Want; it was illustrated with a picture of a male-bodied person standing in front of a full-length mirror, and seeing in it a female-bodied reflection. I knew then that I wasn’t the only person to have had that wish! I snuck into the movie and thought it was really boring, but it still changed my life.

The tough and tawdry Eileen Brennan puts J.A.P. goddess Goldie Hawn through her paces while they’re both wearing Army uniforms—what could be more tingly and lesbionic, especially to an immigrant kid newly landed in the U.S. from the Philippines?!? Though not explicitly a gay film, Private Benjamin (1980) gave me tingles despite (or perhaps because) of its imperialist uplift narrative: Private Benjamin leaves her old money behind to fashion a new homosocial world, and an independent, worldly, feminista self. Of course, all of this involves joining the U.S. Army; but the Army is where she meets a bunch of other cool girls in hot uniforms who—unlike the men in her life—won’t abandon her because she’s weak, or cheat on her because she’s strong.

The first LGBT movie that really informed my gayness was Desert Hearts, but not really because of the movie itself. I was 18, in college, and escaping my life by going to a screening in the middle of the day. (I still do this.) I didn’t even look to see what the movie was. I just sat down and started watching. As I realized it was a movie about lesbians, I looked around and saw all these lesbian couples—women I saw every day on campus and suddenly I realized “oh—THAT’S why they are always together!” and I was so fascinated and intrigued by the audience that I barely watched the movie. It was a moment of deep influence because it was my first realization that movies create community—that they bring like-minded people together in a very real way that no bar, party, or even activist group ever could. I’m not even sure how Desert Hearts ends.

In 1999 I was in my senior year at UCSD studying queer theory with Judith “Jack” Halberstam, had been out for six years, and was working at a video store in San Diego’s Hillcrest gayborhood, so I’d seen more than my fair share of LGBTQ movies. I liked a lot of them, and loved a few. But then Jamie Babbit married adorable teen lesbian romance with culture-wars-fucktardedness-skewering satire and exploded my brain. But I’m a Cheerleader spoke to the ‘tweener queer generation, those of us who were out in high school in the ’90s (when things were just starting to change, but oh so slowly, before high school GSAs, and waaaay before Glee) like nothing before it and nothing since, and made me go all mushy to boot. That sweet and salty mix of funny and heart and reallyfuckingsmart is something I aim for as a storyteller, and But I’m a Cheerleader stands as one of the all-time best examples of how to do it well. (And I still think Jamie Babbit might be the secret love child of John Waters and Nora Ephron.)

If I had to pick just one queer film that changed my life, it would have to be The Incredibly True Adventure of Two Girls in Love. It was the first time I’d ever seen an image of queer teen girls on screen, living in a contemporary world with all the same trials and tribulations I had as an out queer teen in the mid-90’s; they smoked pot and passed each other notes at school, discovered cheesy romantic poetry and wore the same crappy outfits over and over again. I also had the auspicious pleasure of seeing it at its world premiere at the Academy Theater in Northampton, MA, where I was staying with my dad for the summer; the opening coincided (deliberately, I’m sure) with some kind of women’s festival, and the line was literally around the block twice, with my dear ol’ dad as the only man in the bunch. I’m sure the movie would’ve had a strong impact on me no matter how or where I’d seen it; but having that experience of being in a queer audience was also very poignant and powerful for me as a 16-year-old. Knowing that we were all laughing at the right places because we were all sharing this massive inside joke, because we get it, we’re all on the same team—that was a brand new experience for me. And I loved it so much, I came back to Northampton two years later to attend the Dyke Disneyland that is Smith College!

While there are other movies that could easily cover more issues in our community, I think during my time Boys Don’t Cry (1999) was the movie that made me say “that’s it,” don’t be scared to express yourself. I know that it has a mainstream Hollywood appeal, but to be honest I don’t think any other film would have reached me when I was so young. Hillary Swank’s portal of Brandon Teena left even my most conservative friends speechless. Teena showed me that self expression and staying true to yourself was possible even in Nebraska. He was brave.

Cheryl Dunye’s Watermelon Woman (1996) is the film that first presented me with an idea—a visual idea, beyond the texts I read during my time as a graduate student of “women’s studies”—of a lesbian history and a lesbian community. Watermelon Woman is a type of mise en abyme: the film’s protagonist, which Dunye portrays on screen, is a budding filmmaker who is in the midst of making a film about a relatively unknown black lesbian actress, Fae Richards (the “watermelon woman”) from the 1930s who had an affair with a white woman. At the same time, Dunye’s character falls in love with a white woman, so the mise en abyme effect is one that discusses the very real dynamics of race, sex, and sexuality throughout the 20th century. Smacking of another one of my favorite ’90s flicks, Clerks, and set in my “home city” of Philadelphia, the city “of sisterly affection,” I will always have a strong affectation to this film.

My gay movie moment was the Canadian film When Night Is Falling, by Patricia Rozema. The year 1995, I had just fallen in love and kissed a girl for the first time and I was totally closeted. I had just started grad school and was reading the Village Voice when I came across a review for the film. I can’t remember if the review was good or bad, but of course that’s not what mattered to me at the time. So I snuck over to the Angelika theater on a weekday, mid-afternoon to see the film…alone. I think the film had all the components that appealed to my budding lesbian conscious: a hot professor, a circus performer, an interracial relationship, and a spurned boyfriend. 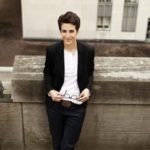