Earlier this month Terry Gross interviewed Quentin Tarantino for his latest film, Django Unchained, which is getting lots of attention this award season.

Earlier this month Terry Gross interviewed Quentin Tarantino for his latest film, Django Unchained, which is getting lots of attention this award season. In her inimitable fashion Gross never shy’s away from asking the hot button questions. In light of the Sandy Hook massacre and the attention on gun legislation Gross asked Tarantino his thoughts about violence in entertainment. This clearly pissed him off, but the ever affable interviewer coxed out a thoughtful answer. Coming from a filmmaker who has defined violence in his movies with humor, gore and wit, he is able to articulate the core of the issue.

Tarantino basically said, violence in film is art, violence in real life is… well, real life. He went on to say that (I’m summarizing) his movies are make-believe, they are not snuff films, and that is the difference:

“The only thing that I’ve ever watched in a movie that I wished I’d never seen is real-life animal death or real-life insect death in a movie. That’s absolutely, positively where I draw the line. And a lot of European and Asian movies do that, and we even did that in America for a little bit of time. … I don’t like seeing animals murdered on screen. Movies are about make-believe. … I don’t think there’s any place in a movie for real death.”

Alix Olson, The Second Coming of the Protagonist 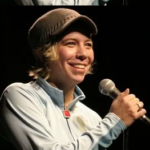 Jill Sobule On The Road Again