How is the body ever not politic?

How is the body ever not politic? Especially when black youth in hoodies are deemed threats, and women are viewed as commodities of availability…how, in this social climate is the body not politic? Aura Rosenberg and I began a conversation about her work in March of this year, during her I Know It When I See It exhibition at Martos Gallery. The exhibition title refers to Supreme Court Justice Potter Stewart’s famous answer on the nature of hard-core pornography, as outlined in Jacobellis v. Ohio (1964). Stewart’s answer acknowledges certain social nuances as indescribable yet detectable by the eye. As if our eyes operate independently of social mores—whether or not we are in agreement or in question of such mores.

So how do politic-aware bodies engage worlds of sensation, undeterred by dominant paradigms? Artist and educator Aura Rosenberg paints and photographs through a constant questioning of how the body’s personal, sexual, and cultural roles are positioned and repositioned. Rosenberg’s work questions the body both as a currency of consumption and a source of release. Working prolifically for decades in the US and in Europe, Rosenberg shows no sign of slowing down: in just the first half of this year, Rosenberg will have had 4 shows in the US. Working with pornography as a subject 20 years ago was not as widely accepted as it is today. The show where we met earlier this year was comprised of images from the golden age of porn: the 70s and 80s. Under her touch, the corporeality of the flesh defies the idea that we ‘know it when we see it’—precisely because when we see “it,” we want to know more, and the job of “knowing” is really never done.

Here is our conversation about Rosenberg’s creative process, her in-depth readings of how photography and painting encircle each other, about media culture and personal desire. This piece is Part 1 of a two-part series with two artists working the spectrum of contemporary pleasure and intellect, where collaboration, politics, and the sense of touch directly critique various degrees of social acceptability. Next week: Part 2!

Patricia: Aura, how do you think painting and photography differ in relation to how women have been represented in art?
Aura: I started out as a painter at Sarah Lawrence College in the early 70s, which was all women at that time. My first subject, typically, was the female nude. My work started to change after I entered the Whitney Independent Study Program. Modernism was coming to a close; the mandate to “purify” the medium, i.e., to affirm the flatness of the picture surface, had turned painting into an end game. I tried processes like rubbings in order to make an image without rendering an illusionistic space. Later, I made imprints using my own body both as a formal device and as a sign.

In general, painting both depicts material and is material itself. Material and image self-reflexively reinforce one another. Because collectors historically made use of paintings to display their wealth and power, in Ways of Seeing John Berger characterizes painting as more a vault in the wall than a window on the world. Delacroix’s Death of Sardanapalus is a good example. It portrays the Assyrian King destroying his property, including his women, rather than let them fall into enemy hands. Jeff Wall referenced this painting for his photograph The Destroyed Room, which is clearly a woman’s room. Wall stands out as an artist who has considered the relationship of painting and photography vis-à-vis the representation of women.

In contrast with the literal surface of a painting, photographs are supposedly transparent, which exempted them from the Modernist demand for flatness. Jeff Wall addressed this too in Picture for Women, which he describes as ‘a kind of classroom lesson on the mechanisms of the erotic’. In this case he’s referencing Manet’s A Bar at the Folies Bergère. Like Manet, Wall brings the gaze—and by extension desire—into play. Since Wall is shooting a mirror, the surface of the image is contiguous with the surface of the photograph. It makes the transparency of the surface tangible. A series of looks bounce back and forth between the woman he’s photographing, the photographer (Wall himself, holding a cable release), the camera and their mirror images. In the Phaidon book about Wall’s work Thierry De Duve diagrams the directions of these gazes, showing that the photographer is looking at the woman’s reflection – and that she reciprocates the camera’s gaze rather than that of the man.

Patricia: How do you reconcile the materiality of each medium in the works where you combine photography and painting? When do techniques supplement the context you are building and layering?
Aura: Painting over photographs brings touch to the image. I’m not trying to alter the “image” per se.  In fact, I try to reproduce the source photo as exactly as possible. In keeping with my general approach to mark making, I want to make as few independent decisions as possible. Even so, a subtle transformation happens along the way. As I paint over the photo it starts to look different and—more importantly—to feel different. It’s interesting to watch this change pass across the surface of the photograph as I paint.  It’s the difference between an informational image and the materiality of paint. In contrast to the specificity of painting, the information in a photo is mutable. It lies loosely on the surface.

Patricia: That idea of photographs being mutable is so counter to how people perceive photography: as proof, as “indisputable,” rather than carrying a temporality of its own. Do you think it’s possible to not have visual pleasure? It’s one reason why I think the anti-pleasure feminists are missing the point. It just encourages repression.
Aura: Even if images seem devoid of visual pleasure, they may still have the power to disturb us and make us thoughtful. The worst thing is to become numb. Pleasure can be complicated; the things that most disturb us can carry the strongest erotic charge. Perhaps they’re being rejected for that very reason.

Patricia: Following the Calvin Klein ‘heroine chic’ Kate Moss adverts in the ’90s, there was another CK campaign, in which an older male was asking a youngish pubescent girl invasive questions with a dominant swagger in his voice. The male was not given a face, we heard his questions and then saw the girl’s awkward reactions. The ads were compared to porn film castings at the time. Another vignette: Terry Richardson injects pornographic references into his work and it just passes for cheeky. These and more examples show how pornography is part of mainstream consciousness in subtle ways. One can walk into Saks Fifth Avenue and drop a lot of cash for a Cartier “love” bracelet that references a mechanism for SM dominant/slave play, but the moment we admit to basic pleasure…things get difficult to accept.
Aura: Curiously, when my book Headshots came out in 1996, my publisher Skuta Helgason expected it would generate more sexualized imagery of men. The book featured b&w portraits of men in ecstasy, which I meant as a counterpoint to mainstream representations that show men as always composed and in control. Shortly after my book appeared, huge Calvin Klein billboards of men in underwear went up in Times Square.

No doubt, this was a coincidence. I wanted to produce the kind of pictures of men that I thought were missing. CK wanted to sell them something. Notably, despite the escalating eroticization of marketing, the CK ads with Brooke Shields would never happen today. We’ve become much more sensitive about connecting sexuality to children.

Patricia: Your photograph in the Jew York show at Zach Feuer Gallery shows a young woman in an enclosed space, with a headwrap and Star of David patch on her jacket. Her posture and environment suggest the quarantined. I understand how that relates to Jewish history, but is there more going on that I am not reading? Is that your daughter, whom you’ve been photographing on and off for some time?

Aura: Yes, it is my daughter, Carmen, who inspired the series featured in my book Who am I? What am I? Where am I? These were photos in which I invited artists to work with children. The project derived from the kind of face painting that often happens at school fairs where children try out “pretend” identities.

The photo at Feuer is part of this. I shot it with Nic Guagnini and Karin Schneider in the alley alongside their Harlem apartment on a cold, snowy night. Carmen was freezing, as was my camera. Nic and Karin bought old clothes and sewed on the hand-made star themselves. The bag Carmen is holding had belonged to Kenneth Anger who gave it to Karin. Nic and Karin are close to Carmen and know that she is the granddaughter of a German Jewish refugee and she has spent much time in Berlin as well. We shot in black and white and the reference is clearly the holocaust but there’s an uncanny residue of fashion photos like those by Helmut Newton, a refugee himself.

Patricia: You also have a painting, Quiet Rock, made from four album covers, in LAT. 41° 7′ N., LONG. 72° 19′ W, at Martos Gallery in East Marion. When I look at the record covers, sex comes up again. Between Chuck Berry, “The Animals” and “Joy Division,” all of those words reference sexual spectrums and hidden senses. Each album cover has a sense of the hidden: Chuck Berry and his lust for teenage girls and underage pornography tapes, the Animals as makers of rock ‘n’ roll music (the very public release of repressed sexual energy) and then Joy Division’s darker palate of desire.
Aura: Yes, it’s about the hidden in many ways.  I painted over the covers except where I had traced the words Quiet Rock. Through contrasting painted and unpainted surfaces, the words become faintly legible. This also alludes to a painting with the same words that I made when I was in my 20s—when albums weren’t yet artifacts. At that time I felt a strong connection between what I was trying to do as a visual artist and rock music.

I’m working on a new, related painting Quiet Riot. It comprises a collage of riot photographs that I painted over except for the words “Quiet Riot.” These riots are manifestations of unfulfilled desires – produced by managed democracies, where wishes are not being carried out. (By the way, it’s almost exclusively men in the riots) I’m making work for a show in LA at MJ Briggs/Anna Meliksetian Gallery that will be called “Scene/Obscene.” From photographs of porn scenarios, I’m isolating parts outside the bodies, enlarging and painting over them. Etymologically, the word “obscene” may derive from Greek theater where playwrights portrayed particularly strong emotions off stage. In terms of staging, they are literally, the obscene.

Patricia: Outside the gallery/museum context, some of your photographs of men were used by a Swedish AIDS-activist group for a safe-sex campaign. How did the Swedish Federation for Gay and Lesbian Rights find you?
Aura: The women from the Federation who contacted me had seen a portfolio of Headshots photographs in ETC, a Swedish magazine. The cover was an image of the performance artist Mike Smith with the headline “Orgasm!”—somewhat blunt, but amusing. The Swedish government was producing a safe sex campaign using traffic signals—red meant STOP, yellow, CAUTION and so on. The organization, headquartered in Malmo, wanted to show that safe sex does not preclude pleasure and chose my photographs for that. They launched a media campaign that used posters on buses, banners, postcards and T-shirts. It was great to see my own images mobilized this way.

(1) excerpted from an interview with the artist at: http://bombsite.com/issues/1000/articles/7034 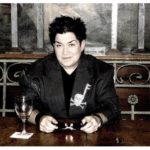