Singer songwriter Jill Sobule is back after five years, since her last release, with “Dottie’s Charms.” This is an album for the literati or should I say by the literati.

Singer songwriter Jill Sobule is back after five years, since her last release, with “Dottie’s Charms.” This is an album for the literati or should I say by the literati. For several years Jill and been plotting some kind of collaboration with her friend, Colombia professor and author, David Hajdu. The result became “Dottie’s Charms”, an inventive set of original songs all penned by famous writers, wrapped in unmistakeably catchy up-beat (sometimes wistfull) Sobulic-melodies.

Hajdu explained to the New York Times that “the plan, had always been to tap into the creativity of authors who might never have had the chance to write a song before.” The results are lyrics by writers; Jonathan Lethem, Sam Lipsyte, James Marcus, Sara Marcus, Nina Mehta, Rick Moody, Mary Jo Salter, Luc Sante, and Vendela Vida.

Souble for her part said that to have others write the songs was a “a complete slacker idea…” But don’t be fooled by Sobule’s self effacing ways, for this venture is stamped by her indelible charms. And I say that both figuratively and literally. The inspiration for the songs comes from a vintage charm bracelet given to her several years ago. The bracelet is inscribed with the name of its original owner, Dorothy, and from it dangles various curiosities; the statue of Liberty, an office chair, a jet plane, a mezuzah, and a Canadian penny. Each writer wrote the lyrics to one of these charms.

You can find “Dottie’s Charms” on vinyl (that is if you can find a record store) or you can stream the whole thing along with some arty videos at Harper’s, while you wait for the digital release. In the meantime check out the single O Canada, which I think is a lesbian coming of age story?

And if anyone knows who Dottie is, contact Jill she really wants to know. 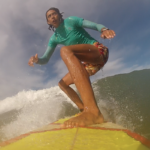 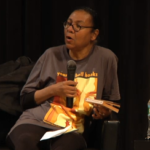 Are You Still a Slave, A Discussion At the Bell Hooks Residency