This past Sunday began the Toshi Reagon produced week long Word*Rock*& Sword, A festival exploration of Women’s lives. From Sunday to Sunday, Sept 15—22, in various venues around the city, Reagon has orchestrated a diverse assembly of women who will run workshops and discussions in the arts, social issues and the intersection there of. The week culminates with concert at Le Poisson Rouge in the West Village, a mighty musical experience that you really do not want to miss.

The series of events runs as follows:

TUESDAY, Sept. 16th 7pm to 9pm
We Who Believe in Freedom: A Conversation on Women, Criminalization and Justice.
The Schomburg Center for Research in Black Culture
515 Malcolm X Blvd  New York, NY 10037 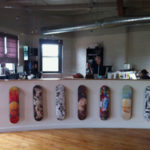 The Next Art Capital of the World… Cleveland!?