Julia: So… you know when you’re walking down the street and you see a hot butch dyke and your head turns and you smile and get flirty…

Julia: So… you know when you’re walking down the street and you see a hot butch dyke and your head turns and you smile and get flirty… only to realize—with GREAT disappointment—”Oh, that’s a dude. Not a dyke. Dammit.”

Amy: Of course. Happens more than I’d like to admit.

Elizabeth: Ugh. I have to remind myself every time I go to the East Village that the hot bulldaggers everywhere are in fact dumb, stupid, cisgendered boys.

Amy: It’s sad, really. Sometimes it’s your professor or even worse, your dad’s friend and then it’s just embarrassing.

Julia: OMG I know. I get so disappointed. Like, “What a waste.” Which is so lame of me, but… whatever.

Amy: “What a waste,” that’s a great way to look at it. Waste of what though? Your time? Your enthusiasm? Or waste of a person?

Julia: Cuteness. On a boy.

Amy: TRUE. Although…. there are SO many more hot boys out there that I’ve just embraced/accepted it.

Julia: Sigh. You are so forward thinking, Amy. Someday I will mature and be like you.

Julia: So there’s this blog on blogspot which has taken the dilemna of dudes who look like dykes to a whole new level… of funny.

Amy: I think the hilarity is in its specificity of “old” lesbians.

Amy: Because there are a couple entries titled “men who look like youngish lesbians.” Snooze. That’s boring.

Elizabeth: I especially love it because it turns that whole dull and homophobic “that woman looks man” thing on its head. And also because its just hilarious.

Julia: That is a really good point, E. It’s kinda subversive, right? And some of these slay me. Like David Sylvian on the second page? How is that not a lesbian?!?!?!

Amy: Hang on let me look…

Julia: One of these guys even wrote a book of “whimsical poems” called Old Possum’s Book of Practical Shoes. If that doesn’t make ANYONE a lesbian, I don’t know what does.

Amy: LOL Totally. And while we’re on the second page, one of my faves is Norm Coleman.

Julia: Totally! All he needs is some berks and cargo shorts. And three dogs.

Julia: RIGHT?! Okay, but the one that really really REALLY kills me?

Julia: On the home page, July 30th’s “Encore.” Who knew that Kim Jong-il was a lesbian?

Amy: My second fave is that Ralph Stanley guy, the “Father of Bluegrass.” I swear I’ve seen her at Michfest selling home-made candles. June 9th.

Julia: LoL! He bears a striking resemblance to my grandma’s cousin, who is in fact an older lady-lovin’ lady.

Amy: HAHA! I mean, that’s cute. We must immediately talk about… May 8th, Rowland Howard. This guy creeps me out majorly. 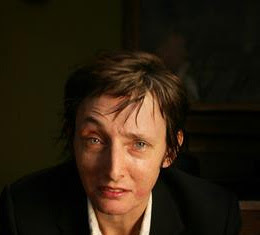 Julia: That’s because he looks like lesbians have swallowed Clay Aiken, and he’s still trying to escape.

Elizabeth: OMG Clay Aiken is totally in there. And I know this lesbian. This is the creepiest kind of lesbian. She has long bony fingers and drinks a lot and is a total date-rapist and might wear a cape in the wintertime in lieu of a coat.

Amy: That grimace is SO lesbian. It’s like “Hey, can I buy you a drink little lady?” (Because you know, all old lesbians call me “little lady.”) (In my fantasies.)

Julia: He also looks like Emma Thompson’s character in Stranger Than Fiction, who was surely a dyke.

Julia: Did you see Kevin Bacon on the page before that one? May 13th I think? He looks like the lovechild of Kevin Bacon and Rachel Maddow.

Amy: Blago! I hate myself for living so closely to him and never pinpointing why I was oddly attracted to him. Can we talk James Spader?

Julia: Yes, please. I would kind of do him. But it’s not my fault. I blame the movie Secretary.

Amy: I think my love of Secretary is all-the-more explainable now. Hey! We said that at the same time. Glad to know we’re on the same page.

Julia: Mine is explainable because I’m a dirty perv, but this helps.

Amy: Now that I couldn’t explain it before… but you know… it’s all the more better now thinking of how much he looks like an old lesbian.

Amy: Yes indeed. Love that movie. Now I need to watch it again and think of him as an old bulldagger.

Elizabeth:  Wow. And I am totally not with you guys on that one. I LOVE Secretary. But James Spader just doesn’t do it for me. He’s too girly.

Julia: OMG. Cuteness! Feb. 27th, the Barenaked Lady guy. He looks like a cute, nerdy butch. So so cute!

Elizabeth: Yes. This is more my speed. Adorable.  She’d be a great date. She’d bring me flowers and chocolate.

Julia: Especially since her band is named after naked chicks. And is on the same label as Sarah McLachlan. Again. MAJOR LESBIAN POINTS!

Elizabeth:  Holy Sappho, Julia. I LOVE that you know that BNL shares a record label with Sarah.  I was totally a member of her official fanclub, Murmurs, back in the day. But I digresss. And I absolutely, hands down choose young Bob Dylan as my shouldbian dream dyke. Though I know that in real life he was kind of a terrible boyfriend.

Julia: LoL! That is so freaking funny. You know who else needs to be on this list?

Julia: David Carradine. In memoriam. Actor. Bill. Lesbian. I just searched the blog for DC, but they haven’t gotten to him yet.

Amy: Wow, so true. (I had to do a Google image search just now.) Is Drew Carey on this list? Total old lez. And annoying, but I digress

Julia: Good one! No, he’s not on here either.

Julia: Totes. So in closing, should we offer some advice to guys hoping to make this list? Because c’mon, all guys wish they were lesbians…

Elizabeth: 3. Bizarre choice of accessories. Exhibit A, and Exhibit B.

Julia: 4. Twinkle in your eye and a gruff scowl on your mug. 5. Feathered hair.

Elizabeth: LOL. But of course.

Julia: Okay, we have been doing these chats so long that we are starting to share the same brain. I hope this means that your taste in shoes will rub off on me.

Julia: But only if you want to look like a really creepy lesbian.

Is It Racist to Primarily Date Your Own Race?