Amy: I had a full moon ceremony Sunday night!


Amy: I had a full moon ceremony Sunday night!

Amy: Yeah. My friend upstairs do it all the time and I make fun of them, but was secretly jealous so I finally joined them.

Amy: It was fun! We wrote things on paper that we wanted to get rid of and then burned them while chanting. Actually, I made them chant because I thought it was what was supposed to happen. They don’t usually do that. We chanted like Jambi from Pee-wee’s Playhouse.

Amy: I was making fun, but then I actually got into it and felt it.

Uh… when you said you wanted to roleplay hot lesbian witches, this isn’t exactly what I had in mind…

Katie: You just winged it? Like, made up your own rules?

Amy: They always do it at full moons, the burning of paper and dousing it with milk. But you can add things if you want. So they let me add the chant.

Amy: Have you done a full moon ritual?

Julia: No, never an official one. I used to make up my own rituals in high school. Just simple things, like, draw a circle around myself and pray in the middle. Stuff like that.

Julia: Yeah. I was raised Catholic but was extremely heretical from a young age.

Julia: I left the church at 12 because of a) misogyny and b) I didn’t like anyone trying to tell me that because I was a girl I could never aspire to truly speak to God on my own behalf, and would always need a male priest to do that for me. Highly offensive.

Amy: I was curious because we talked about that last night. One of them joked about making the sign of the cross and I told her you can’t combine Catholicism with witchcraft.

Julia: ‘Course you can. It’s ironic.  Ironic religion is the best kind.

Katie:  How do you guys identify now? Agnostics?

Julia: No, not agnostic. I’ve had a strong innate belief in god since I was a little kid. Now I’m basically a mix of gnostic Christianity, pagan, Taoism, astrology, and spiritualism.

Amy: Spiritually, I don’t know… I don’t have a label for it. But I believe in the power of psychic women. And intuition. Is that spirituality?

Amy: But I’m an atheist.

Katie:  Why psychic women? I think psychics can cause so much harm.

Sorry, Lady. The only person I trust to advise me re: my subversive reading list is Professor Crandal.

Amy: Well, I believe in it as in it exists. But people can use it for good or bad. Or not at all, but it’s still there.

Julia: Katie, have you had a bad experience with a psychic?

Katie: I think they’re full of shit. I think people can have psychic moments, but to brand yourself a channel or a psychic, it’s like, ew. Like, general fraud stuff. Like, I went to a psychic a few years ago with my extremely rich, tall gf at the time (It didn’t last long for some reason.) and the psychic pointed to her and said, “See that young man that’s standing outside, the one you came with?” And I was like, “That’s a girl.”

Katie: She ignored me and said, “He may be poor now, but he is the man of your dreams, and will soon start making a lot of money and buy you a Rolls Royce!”

Julia: Oh, geez. That’s awful. I’m embarrassed by that on behalf of everyone who has faith in this kind of stuff. I’ve been to a few people I’ve believed had a real gift, a few who I just had interesting symbolic conversations with, and one or two who were clearly frauds.

Amy: I don’t know from experience but in Latino cultures, speaking with psychics is common place.

Julia: But I usually won’t go to psychics anymore. It’s easier to just whip out my tarot cards and see what’s up with the universe myself.

Amy: I want to take a psychic class. I believe I have the ability but don’t know how to channel it.

Amy’s forays into the occult had more dire consequences than we could have predicted: that Bedazzler will NEVER be the same.

Katie:  What makes you think that?

Amy: They actually have classes, which I’m positive I couldn’t sit through without laughing.

Katie:  SUCH A GOOD IDEA. Where do you take them?!

Amy: Ummm. I just have a lot of moments of clairvoyance and moments when i think of people and they immediately show up. Stuff like that. I believe I’m psychically connected to a lot of people.

Katie: I’d totally want to do it in a journalistic/expose kind of a way. Not that I’m negating/denying that you have those moments, Amy, I’m just guessing that many of the classes are a total sham.

Amy: Oh, totally. But I’d like to learn how to harness the powers I have.

Katie: I watch TV shows about psychics sometimes. And it breaks my heart because people want to believe SO BADLY. Like, a channel/psychic person will visit a local community center, and say something like, “I feel like someone in this room once lost someone whose first name started with the letter ‘L’” and then no one will say anything, and she’s like, “how about ‘T?’”

Katie: And then a sad-looking woman will leap from her chair, suddenly looking alive, and scream, “MY NEIGHBOR’S BROTHER LOST A SON WHOSE NAME STARTED WITH ‘T!!!!’”

Amy: Julia, what do you think about psychics? And powers?

Julia: I think that everyone has at least some latent “psychic” ability, and that we’re especially connected to the people we love.

Julia: But yeah, I can’t help but be suspicious of the majority of people who try to profit off of those kinds of abilities, and to assume that most so-called psychics are probably frauds.

Amy: So what’s the situation with the homophobic holistic healing center, Katie?

Katie: Yeah, I had a hideous experience. I’ve been playing phone tag with the director of the center, trying to get a straight answer out of him as to how they are going to rectify the situation they currently have happening. Problem is I signed up for this Ayurvedic nutrition class and it’s taught by one of the center’s founders. So it’s not so easy to just fire or replace her. And she’s the one who said things like, “People who experience same-sex attraction are imbalanced.”

Katie: As I kept raising my hand, time and time again, asking for clarification, thinking there was no real way this was actually happening. In 2011. In NYC.

Katie: In a center that also offers classes on hypnosis, crystal-oriented things, massage (a.k.a. lesbian).

Julia: What bothered me the most when we first talked about this is when you said that no one else in the class spoke up.

Katie: Nope. Everyone else in class acted like I was beating a dead horse as the instructor  clarified, over and over, that yes, she meant IMBALANCE, and that fortunately, said individuals can be HEALED through this ancient practice of Ayurveda. That anyone—even people who suffer from same sex attraction—can find wholeness and happiness if they know how to integrate certain yogic, meditative and nutritional habits and practices into their day to day…

Amy: I never knew they could have something in common with evangelicals.

Julia: Alert the family research council! A cure has been found! headdesk

Amy: Haha. I’m sorry to hear that. It sucks when you spend your money on stuff that ends up being that way. Especially if you were excited about it. Which I assume you were if you signed up.

Julia: How long has it been since you raised the issue with the director of the center?

Katie: Like two weeks. But we keep going back and forth. I wrote him a scathing letter. It was terrifying. I was quaking as I read it back to myself.

Katie: Because I was menacing and angry and right. 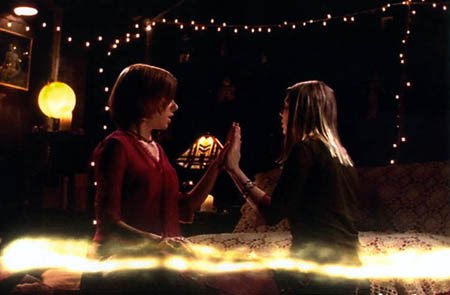 Julia: Awesome. I’m so glad that you are speaking up and staying on them, though. A place like that, of ALL places, really needs to know better.

Amy: Yeah, don’t back down!

Amy: Sic all the lesbian witches on them!

Katie: Do you guys know any Wiccan lesbians? I don’t. I wish I did.

Julia: I thought I was going to be Wiccan when I grew up. But even that religion is too organized for me.

Amy: Hahaha. I can see that. It seems stringent.

Julia: I am a little witchy, in my own way.

As Goddess of the Moon, Diana wore a flowing luminescent robe, and sometimes, broadcaster headphones.

Amy: What is it Diana says about witchy femmes or something?

Julia: She says that all femmes do fortune-telling.

Amy: We should force her to be our femme cult leader.

Julia: I was JUST thinking that.