Amy: What else do we have to say about ourselves as butches and femmes?

Professor C: Yeah, let’s think of things people always forget to talk about when it comes to b-f.

KL: Wait. Like what people don’t know about us?

Professor C: In some ways b-f is the model for lesbianism because of the historical precedent, so some of the hate/distancing may just be people defining themselves against a model? I don’t know, is that true?

Amy: I think that makes sense.

Professor C: Or we could talk about clothes.

Amy: Hmmmm! Yes! Can I start by saying this? And you try to figure this shit out?

KL: YES! Clothes. Here is what I can’t stand…

Amy: I just bought Ali this Pee-Wee Herman shirt that looks like his suit. And she just put it on, and it’s the hottest thing ever. What does that mean? I like gays mixed w/butch?

KL: … when femmes feel like they deserve a medal for wearing a lot of lace and pink and shit with cherries on it. Like, get away from me. KL: No, he is not. Paul Newman in Cool Hand Luke. Butch icon.

Julia: He is completely queer!

Julia: I liked your recent referencing of River Phoenix’ character in Stand By Me, Lieds. He was such my teen heartthrob.

Julia: Which makes SO much sense now…

Amy: That’s because he wore tight white t-shirts and looked SO butch. 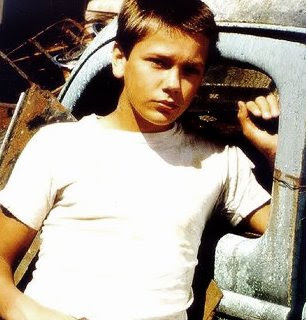 River Phoenix in Stand By Me, hottest butch beefcake shouldbian OF ALL TIME.

KL: Why are tight white t-shirts so butch?

Amy: Sorry Emma, not ALL.

KL: I’m actually kind of torn about actual man butches. They tend to be more mannish than any man I’ve ever met, which freaks me out.

Professor C: The first tight t-shirt in the US was hand-made for Marlon Brando in Streetcar. [butch trivia]

Julia: You would know that. Ha!

Little known fact: tighty-whitey T’s and tanks are like catnip for femmes.

Professor C: I know right. Hahaha. I hate the thing about butches being little boys.

Professor C: Like you get to be grown n’ sexy and I’ll be a little boy. Because you all know grown butches exist! I think it encourages bad behavior sometimes.

Amy: Why do so many butches have an AWFUL fashion sense?

Julia: See, I like a grown butch who can still pull off the teenage boy butch look.

Amy: If they dressed properly, we’d take them more seriously.

Professor C: I’m not saying it’s not a nice look.

KL: Listen: the Humbert Humbert in me likes them looking young. Maybe it’s because I was cheated out of having girlfriends when I was young.

KL: So now I’m trying to recreate a time that never was.

Julia: Katie, that totally makes sense. For me that manifests in that I never expressed my femme gender identity as a teenager, so I kind of indulge it that way now in a youth culture-y kind of way.

Amy: Wait. Emma, what did you mean by “bad behavior”? Getting women knocked up?

Professor C: HA. Butches being irresponsible or being babies.

KL:   Amy, haha! I know. Emma —  I totally get it. But can you name one butch that we both know  — aside from, say, Dee Finley —  who is grown-up and not misogynistic?

Amy: I like a grown butch. Except I’m contradicting myself b/c I was just saying I like a butch in a PW shirt.

Professor C: Femmes are so contrary!

Professor C: I think Katie wants to go out with me. You know she had a sex dream about me, right?

Julia: So what? I have sex dreams about all of our friends.

KL: I am actually laughing out loud right now.

KL: I did. I climbed on top of Emma and rode her like a pony.

KL: And Diana came along and was like, “Honey, you have no idea what you’re doing.” From the darkest depths of KL’s brain, comes… THIS HORROR!

(Only the sword should maybe be a Hitachi.)

Julia: lololol That is soooo so funny…

KL: And she pulled me off and then got to it. Showed me how it was done.

Professor C: It was really a dream about Diana being a bossy femme.

KL: In my dream, I was like, “Wow, I have NO idea how to have sex! This is better than reading Box Lunch!”

KL: Emma, I get your gist. Jist? how do you spell that

KL: No one is grown.

Julia: I think it’s the greatest myth of our culture that “adulthood” is anything more than a construct. Like anything else…

KL: Like, you can tell that Obama has self-congratulatory ThreeWay chats with his buddies about how masculine they all are.

KL: And how feminine their wives are. Hat Box Lunch. Was it good for you, baby?

Julia: So have we unraveled the mystery that is the cultural angst between garden variety dykes and butch-femme dykes?

Amy: I’d really love to read a chat from them about this topic.

Julia: I’m hoping that people will comment and get a discussion going. That’s kind of the whole idea with this topic. Well, that and the unrelenting fun of fuckwitting with you lot.

KL: Yes. We process. We’re like, “It hurts my feelings that you’re wearing a corset and hiking boots. You’re either making a really trite statement about how you don’t have to conform to a gender, or you’re just straight-up zany.” I don’t know which is worse.

Professor C: Haha. Thanks for letting me live out my ThreeWay Vp fantasy.

Julia: You mean your FourWay fantasy. 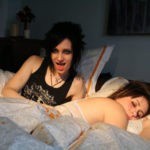