The lights came up at the Classic Stage Company’s for “Unnatural Acts”, illuminating a fresh faced cast of handsome white boys who were to protray the story of a group of closeted gays in Harvard’s

The lights came up at the Classic Stage Company’s for “Unnatural Acts”, illuminating a fresh faced cast of handsome white boys who were to protray the story of a group of closeted gays in Harvard’s class of 1920. I slunk into my chair and checked my phone wondering how I might make it through this two hour production of the Privileged at the Ivies. A story line that seemed so far removed from my own life.

How wrong I was.

I was riveted by this production with and ending monologue that had me in tears. The story, while an historical account, touches upon all the basic struggles with self-homophobia and intolerance that we Queers have faced from time immemorial. Poignant irony that “Unnatural Acts” opened the night before New York received a landmark victory in our civil rights. Tears of joy often feel the same as tears of sorrow.

“Unnatural Acts” is a gripping true story about a group of undergraduates who lead a secret gay life at Perkins 28 (one Harvard’s campus housing). The story begins with the suicide of one of its members, and ends with a “Secret Court” Harvard convened to interrogate and expel anyone at Perkins 28 believed to be homosexual.

Harvard’s Secret Court was buried in history until an undergraduate named, Amit Paley writing for the Harvard Crimson, came across the files while doing research in the Universities archives in 2002.

This 2011 production of Harvard’s embarrassing past, by the Plastic Theater directed by Tony Speicale, has been in the making since Paley’s story was unearthed and became a huge controversy at the school. The story as well as the young men characterized in “Unnatural Acts” were pieced together through, Harvard’s Secrete Court notes, letters, and historical records gleaned from year books, police reports and ephemera exchanged between lovers and friends.

I only learned the play was debuting at the award winning off Broadway CSC when one of its co-writers, Catherine Barricklow (friend of Vp by way of LAVA) had told me about it just a week prior when I bumped into her at LAVA’s performance. This weekend Catherine gave me some insight into the production:

How did you get involved with this play?
I became involved with this project in August of 2009 when Tony Speciale asked me to join the group of authors and actors who were collaboratively developing what would become “Unnatural Acts”.  In addition to serving as as one of the co-authors, I’ve been Tony’s associate director for this production at CSC.

And how did you meet Tony?
I’d served as Tony’s assistant director on several other projects, eventually became clear that all [15 members of the Plastic Theater] of us were contributing to the way in which the story would be told theatrically, and to the development of the script.

Describe what the process of working with so many contributors is like?
During discussions about storytelling, plot structure, character development and relationships, all of us offered suggestions and exchanged ideas.

Often a group discussion about a particular scene would lead to an improv in which the author/actors would explore some of the possibilities raised in our conversations. Those of us watching the improvisations were usually typing away furiously to capture the dialogue, which we would later edit and/or extensively rewrite.

Some authors would bring scenes they’d written into rehearsals, and the group would try these on their feet, discuss, and then one or several people would be responsible for rewrites.

It was an intense, grueling, and rewarding collaborative experience.

I didn’t even know you came from a theater background.
In college I dabbled in as many aspects of theater as I could (wanting to be as well rounded as possible as an artist) but focused primarily on directing.

I also had experience with stage management, which I’ve found to be immensely useful, which is what initially lead to my work with LAVA, and also resulted in work at The Public theater as a PA.

all photos by Joan Marcus 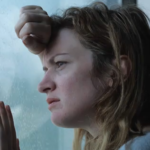 The Sea In The Desert: “The Sea Is All I Know” Premiere