Hailing from Durham, NC are the Butchies, a.k.a. Kala Wilson, Allison Martlew, and Melissa York.

Hailing from Durham, NC are the Butchies, a.k.a. Kala Wilson, Allison Martlew, and Melissa York. Humorous, edgy, gender-bending, genre-blending, political, and bod, these grrls rock hard in a surprisingly delightful way. They break sound and mental barriers with their music and their presence.

What is happening with the Mr. Lady label?

Kaia: I actually am no longer involved so I am probably not a good person to ask.

Are you still recording at the label?

Kaia: Our next record is not going to be on Mr. Lady. But I have total respect for the label.

With Mr. Lady, you didn’t stick too closely to your own style of music. Was it more that thematically you were addressing a lot of the same issues?

Kaia: Yeah, exactly, I think that would be more important to us. And also we have an eclectic taste in music. We couldn’t necessarily do everybody justice because there are all these [niches]….

Do you use a label or term to describe what genre of music you play?

Kaia: I always say it’s rock with tangents. We don’t try to stay within any kind of boundaries although I think that just naturally we have evolved to have a certain kind of sound.

Al: I tend to like to speak for myself on these things, but the kind of identification we have is that butch-lesbian thing. It is always a complicated thing. We definitely identify as women.

Do you consider yourself to be part of the trans or trans-liberation movement?

Al: Not personally. I am totally in support of it, but personally I don’t identify as trans. I think in the bigger picture of what trans is, I think that we all fit into that by basically not fitting into societal stereotypes of gender.

In your fan base, there are a lot of young queer people who are listening to your songs and hearing your messages. When you were younger, who were you listening to? Did you have any role models for yoru choices?

Al: The thing that’s really funny…when I was in high school and even when I was coming out in college, I was totally into metal. So as far as role models, not really.

Is not playing Michigan Womyn’s Festival this year a choice?

Mel: Well, we weren’t asked, so that made it a lot easier. [laughs]

How have people responded to you playing there?

Mel: Oh, you know, basically starting off by saying we’re trans-phobic and then talking about how we’re racist. [laughs] You know it goes from that one ridiculous notion to something so ridiculous it’s just kind of not real.

Where do the racism accusations come from?

Mel: Who knows? It is so easy for peole to compare things to race, yet they never deal with their own racism. So because we are playing MIchigan it’s basically, in turn, that we’re Nazis.

It is important what labels you choose. So what does that mean that you are a butch dyke and not just a dyke?

Mel: I guess I consider myself more of a dyke and I have always considered myself that. And butch, that’s just the look that I like. I don’t mind looking like a boy on the outside, but knowing what I am on the inside. Also, I think that dykes are really proud of being lesbians.

When is Come ‘N Get It coming out? 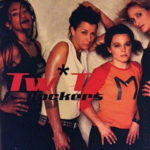