How are the dogs?

How are the dogs?

They’re fine. The youngest one is on a nightly mission to destroy as much of my apartment as he can.

This is Lou? He’s still a puppy right?

Yeah, Lou Dog. He’s under a year, so he’s behaving as he shoudl be in addition to that he seems to have excessive energy and body strength because he’s a pit bull. He can do things that are shocking. And also the shee tenacity and diligence which it would take for him to destroy certain things, which he accomplishes, is amazing.

Speaking of tenacity, you take on so much with the issues you talk about. How do you shake it off everyday?

Millions of people get as upset as I do, just not all of them have a radio show. It’s something that is so endlessly frustrating. The audaciousness of the policies put forth by the Bush administration and their apologists in the mainstream media. And it’s the same level of anger and consternation that I would feel if a person that I dealt with on a day-to-day basis at work or at home lied to me, took my money, put me in danger, treated me like a chump. That’s essentially what the Bush administration does…. It’s like having someone empty your purse and then take that money and use it for something you absolutely disagree with and then lie to you about it day after day after day…. To have so many people lie to your face about it, not just from the administration, butpeople behind the anchor desks in corporate media.

The hacks that are masquerading as journalists.

The corporate, allegedly journalistic hacks that serve the neo-con establishment.

Bill Moyers gave a speech recently that broke down the beliefs about the Rapture coming—they don’t care about the environment or the children, because we’re not going to need it.

So you have people who are psychologically impaired because they’re laboring under a delusion of a cult making decisions that affect your life. You wouldn’t let a psychotic in other ways into government positions. So why do they get to have dominion?

In an episode of The West Wing they made a point that in a time of crisis, everyone should hope that the person in charge is more thoughtful, more informed, and more intelligent than they are. We have nowhere near that.

It’s a dysfunctional relationship with our media and government. Because they abuse us, lie to us, and take our money.

And we let them.

That is the definition of an abusive relationship.

There are so many things that are so obvious and textbook. But it’s still, “There’s no elephant in the room.”

Maybe that’s what it is. It’s so audacious, so obvious, so absurd that you can’t see it. You don’t, as a resonable adult, know how to deal with it beause you never expected it.

And there’s so much hate. According to Howard Zinn, hate is not a natural state.

It’s easily stoked, unfortunately, but it isn’t people’s natural state. Even if people do feel hate, anger, and rage, they’re happier when they don’t.

And they base the fear in their faith. When I think of a man of faith, I think of Gandhi or Dr. King.

Religion is  always used by scoundrels. Like patriotism. The least religious, the least patriotic people are those who rise to right-wing authoritarian positions. They use it to propandagize the masses…. Adn they have successfully propagandized half of the American people…. Bush didn’t win the first election and it’s my opinion that he didn’t win the second. Exit polls are used for a reason, and it’s because thy’re right. The exit polls called the election for Kerry… Therefore, in my opinion, the Bush administration has been illegitimate since Antonin Scalia installed him.

But it’ll be like the Deep Throat thing, where we have to wait until all the Bushes and their minions are dead and gone for the truth to come out.

Yeah, 20 or 30 years from now, when journalists have enough balls to talk about history as it really happened. The worst enemy of a right-winger is historical fact.

No kidding. That’s a life-changing read…. The media could book Howard Zinn every day. They don’t. They won’t, because that’s too much truth and you can’t marshal cultural hostility against this 80 year-old historian who is also a World War II vet.

You can’t sensationalize him.

Right. In the build up tot he Iraq invasion, there’s a reason the mainstream media only booked a handful of actors as representatives of the anti-war opinion—to make it look stupid. What would the public’s perception be if the only representatives of the pro-war movement were Toby Keith, Ted Nugent, and Kurt Russell? But on the anti-war side were former ambassadors, former political people, FBI people? All those people were available. They were never booked because the establishment needed to have the public percption be “War—good. Anti-war—stupid.”

That’s the type of thing that puts me in a terrible mood because it means their propagandizing is so prevalent that it’s just depressing.

Then there is genetic propaganda. I grew up in Louisiana and, in the mid-80s, we had separate white and black proms….

Yep. And there was no end in sight.

How did they justify it?

So at least you can say…

The government didn’t pay for it.

That’s the norm. It’s nature and nurture. It’s in some people’s nature to be hostile or aggressive. They’re wired that way…. But that’s separate beause then what happens is the double-whammy of nurture so that the aggressive nature is also unfortunately nurtured by right-wing propaganda. You can also have the aggressive person who is nurtured by progressive views. If you have a progressive household and an aggressive person, chances are you’re going to have a much better individual.

Like Lou Dog, or someone who’s at least somewhere in the middle.

More in the middle or a person who becomes one of those real radicals for Greenpeace, which is still ok by me.

Who gets arrested by John Ashcroft for pirateering.

So Ashcroft arrests them for being an eco-terroritst. I’d rather have a Greenpeace agitator in my home than a right-wing….

A Klan member, militia member, or Glad’s Clan evangelicals. They don’t have the first idea about spirituality. This personality type keeps rearing its ugly head year after year after year, since the dawn of time. You will always have right-wing personality types sublimating the more humanistic, more spiritual instincts of people. For every Gandhi, there will be fifteen Joe McCarthy’s or Roy Cohn’s or…I’m trying to think of a leader from India during Gandhi’s time who was authoritarian, but I don’t have my historical facts about the name of the group that was keeping Gandhi down.

It was the British.

There had to be an Indian puppet.

Well, Nehru was the closest, but it was the British until India gained its independence and then Gandhi, a Hindu, appointed Nehru, a Muslim, to lead the government.

So that was his way of making detente?

For every progressive leader who shakes a nation’s consciousness, whether it be Gandhi or King or Margaret Sanger, Emma Goldman…there are hundreds of right-wingers who seek to oppress them and thousands of sheep willing to follow because of fear. People who are afraid of change. Because it makes them feel unstalbe.

They’re so afraid of change, they vote against their economic interests, against everything else just to protect the purity of the breed, as it were.

It’s just pride, it’s habit. And also, whe you’re talking about as colossal a screw-up as this administration has been, it’s embarrassing. If you were to admit this level of failure in your support for this administration, you have to question everything…. These Republicans have been there kicking around since Watergate. Same policies, same ideologies.

So to say they’re wrong now, they’ve gotta eat a lot of crow.

Can I just say, knowing full-well that you’re straight, you’re a much better lesbian than a lot of lesbians I know.

I’m going to take that as a huge compliment. When people think I’m gay and Jewish, which they frequently do, I’m always complimented. A Jewish lesbian from New York—I wish I was. I’m just not. I am an asexual, disinterested, low libido agnostic, which is not as interesting as a Jewish lesbian.

I’ll leave you with this…. I think that Gannon/Guckert is a guy who has been romantically involved with either McClellan or Rove… Ithink that Rove, McClellan, Mehlman, and Reid are attack queers. They hate themselves…. They also identify with authoritarian masculinity.

They are wanting some daddy action.

Yep. Absolutely. And Ann Coulter, I think, is a man.

Andy Kaufman, to be specific.

Well, now I’m starting to think that she’s just any man, because if it was Andy Kaufman he wouldn’t have been able to resist, on the anniversary of his death, to say something.

He would’ve busted out. Maybe done a little Elvis or something.

I know, so I’m assuming he really is dead. 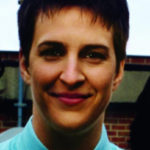