Next week I’ll be returning to West Point, coming out to my commanders, and announcing my resignation from the academy.

Next week I’ll be returning to West Point, coming out to my commanders, and announcing my resignation from the academy. Since I’m anticipating a rough ride I thought I would provide examples of better coming out experiences during my time as a cadet.

So some background information: West Point and Annapolis have one of the oldest, most intense rivalries in collegiate sports, so the Army-Navy football game is a big deal to us. By an unexplainable act of God, I ended up in box seating. This also happened to be around the time I was discovering the underground networking of gay and lesbian military personnel. Specifically, I spent a lot of time on the Servicemember’s Legal Defense Network’s website, which featured Congressman Patrick Murphy’s Voices of Honor speaking tour back in December. Basically, Voices of Honor is a handful of veterans that travel across the country speaking out against DADT and support Congressman Murphy’s bill calling for its repeal.

So, back to the Army-Navy football game. A rather familiar face walked into the very box in which I was staying. He casually socialized with the occupants, but the tone which they addressed him was notably formal. I grasped my friend’s upper arm and asked “Who is that?”

“Murphy, I think he’s a Congressman. “

“That’s what I thought.” What are the odds, seriously.

I leaned in so he could hear me clearly. “Sir, my name is ___ and I’m familiar with your Voices of Honor tour. Thank you for what you do. It means a lot to me.”

“You’re welcome. And thank you for your service. I want you to email me so we can talk.” He handed me his card later in the football game with his personal email on the back. I’m still not sure how he wandered into our particular viewing box, but this is the serendipitous story of me coming out to Congressman Murphy.

A few months passed after that void of any epic coming out experiences, covert or otherwise. However, I kept busy by applying to other colleges and applying for LGBTQ scholarships. The one I pursued particularly aggressively required me to submit letters of recommendation within a week of being notified as a semifinalist. I saw the word “congratulations” in my inbox, confirmed my assumptions with a glance at the email, and picked up my hat and gloves before I headed out of my barracks room. I didn’t even have to think about it; I couldn’t pursue my activism any longer without help.

Five minutes later I rushed haphazardly into my professor’s office. I was sweating in my shiny, plastic Chorofram shoes, and after feeling my pulse my throat I became aware of how tight my collar was around my neck. “Ma’am, do you have a second,” as I closed her office door behind me, consciously worsening the stuffiness in the room and in my heavy wool uniform. Without waiting for a response, I seated myself. “Ma’am I’m transferring next semester. And I need a leader of recommendation in three days. For a scholarship for gay, lesbian, bisexual, and transgender students.”

“And you’re leaving because of Don’t Ask, Don’t-”

She studied me for a second, asked a series of questions for clarification, and agreed to write me a letter of recommendation.

As soon as I was out of her sight, I did a little Jersey Shore fist pump in the air.

Fighting the beat back.

I just came out to my professor. I didn’t speak in code. I didn’t use leave her with any ambiguity. I just told her. I maintained my composure enough to issue a hand salute to a passing officer after letting out a sigh of relief. The very next evening I had an email from her in my box. I knew I wasn’t in this fight alone anymore. Next week, I hope my chain of command is half as receptive as Pat Murphy and my professor were.

Today Are You Happy and GAY! 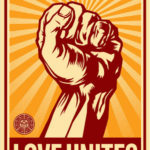